The store will not work correctly in the case when cookies are disabled.
By Samuel W Baker
London   Macmillan and Co
9" by 6" viii, 447, 55; viii, 588pp
The first edition of this very scarce personal account of the expedition to the equatorial regions of the Nile, with their mission being the suppression of the slave trade.
By Samuel W Baker

1874 Ismalia A Narrative of the Expedition to Central Africa for the Suppression of the Slave Trade Organized by Ismail, Khedive of Egypt 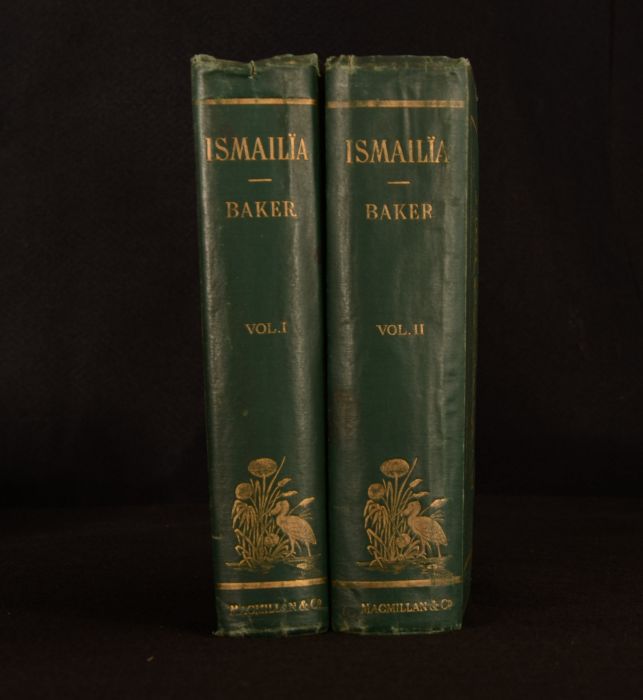 The 1869 expedition was led by the author of this work, Samuel Baker, at the request of his friend Isma'il Pasha, the Khedive of Egypt and Sudan. This military expedition was intended to create a commercial relationship. They started in Cairo with 1700 Egyptian troops, and the Khedive gave Baker the rank of pasha and major-general in the Ottoman army. This work outlines their journey, experiences and logistics. To the introductory chapter, Baker notes 'This enterprise is the practical result of my original explorations, in which I had been an eye-witness to the horrors of the slave trade, which I determined, if possible, to suppress.' 'As a duty to the Khedive, and in justice to myself, I shall describe the principal incidents as they occurred throughout the expedition. The civilized world will be judge and jury: if their verdict be favourable, I shall have my reward.' Complete in two volumes. Prior owner's bookplate to the front pastedown, Percy Livingstone Dickson. The bookplate is by Sidney Hunt. Percy Livingstone Dickson was the Curate of Selston from 1924-5. Following this, he held office as the head master of St Ives Grammar School, Huntingdonshire 1927-8. Volume I is illustrated with, a frontispiece, a large folding map of the route, and a further twenty plates. With a frontispiece and thirty plates to volume II. Collated, complete. A comprehensive account of this journey through Central Africa, with the advantage of being by Sir Samuel White Baker, the leader of the expedition. This is one of many expeditions undertaken by Baker, who is known for his discovery of 'Lake Albert' during his 1864 expedition along the Nile.

In the original full cloth bindings. Externally, generally smart. Light rubbing to the joints and to the extremities. Small loss to the head and tail of spines from bumping and rubbing. Both volumes are cocked. Front hinge to volume I is strained but firm, with evidence of previous adhesive repair, the remnants of which remain to the endpapers. Bookplate to the front pastedown, Percy Livingstone Dickson. Tape repair to the verso of front endpaper to volume I. Internally, both volumes are generally firmly bound though strained in places. Pages are very bright. Closed tear to the top of page 80 to volume II, not affecting any text. Occasional handling marks and just the odd spot.