1848 The Natural History of the Human Species 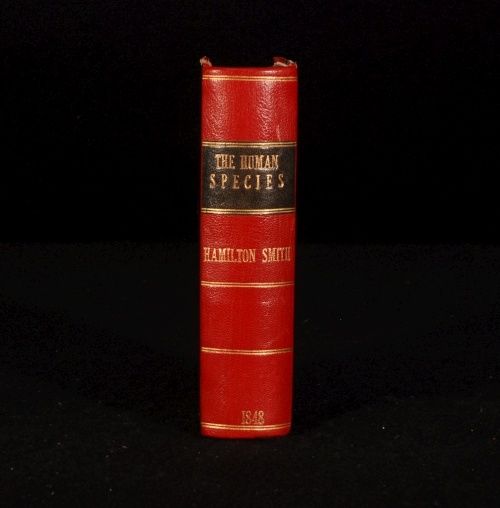 With an engraved portrait frontispiece of the author and additional vignette title. Seven black and white plates and twenty-seven coloured hand-finished chromolithographic plates to the rear (collate complete). Intended as a supplementry volume to Sir William Jardine's Naturalist's Library. Binders stamp of Otheran, London to verso of front free-endpaper. Charles Hamilton Smith, (1776–1859), soldier, spy, illustrator, antiquary and natural historian. From a very early age, Smith had industriously sketched and accumulated data. His interests were wide, so that his sketchbooks included historical, zoological, archaeological, and topographical subjects. His interest in such topics persisted through his time as a soldier; after retirement they became all-absorbing. His manuscript notes (and thousands of watercolour drawings) were made mostly for his own instruction and that of any student who asked to see them. Smith's numerous publications, with his lectures at the Plymouth Athenaeum, made him well known. His industry enabled him to master several disciplines and his accuracy of observation assisted him in the making of accurate drawings of his subjects. Interested in history, as well as the natural sciences, he often gave information to the theatre managers William Charles Macready (1793–1873) and Charles John Kean (1811–1868) and his brother Edmund (1787–1833) on the correct costumes for their productions. Smith's authorship of historical books on war included the translation of accounts of the Seven Years' War in Germany, a piece on the military exploits of the duke of Marlborough (for Coxe's biography), and a narrative of the retreat of Napoleon from Moscow, which he wrote in French. He also contributed articles on the subject of war to encyclopaedias. Many of these works were illustrated from his own drawings and watercolours. The illustrations in his natural history books were also based on his own original sketches. Some of Smith's drawings were used for the illustrations in a number of volumes which he wrote for Sir William Jardine's Naturalist's Library: two volumes of the Natural History of Dogs (1839 and 1840), the Natural History of Horses (1841), and Introduction to the Mammalia (1842). A Natural History of the Human Species (1848) was designed to complement these volumes, and included his engraved portrait for the frontispiece. Besides these major titles, he wrote and illustrated numerous articles for scientific journals. DNB