1851-4 Report From the Select Committee Appointed to Report the Nature and Substance of the Laws and Ordinances Existing in Foreign States, Respecting the Regulation of Their Roman Catholic Subjects, in Ecclesiastical Matters, and Their Intercourse With the See of Rome, or Any Other Foreign Ecclesiastical Jurisdiction; With an Appendix. Also, Supplementary Papers Relating to the Above 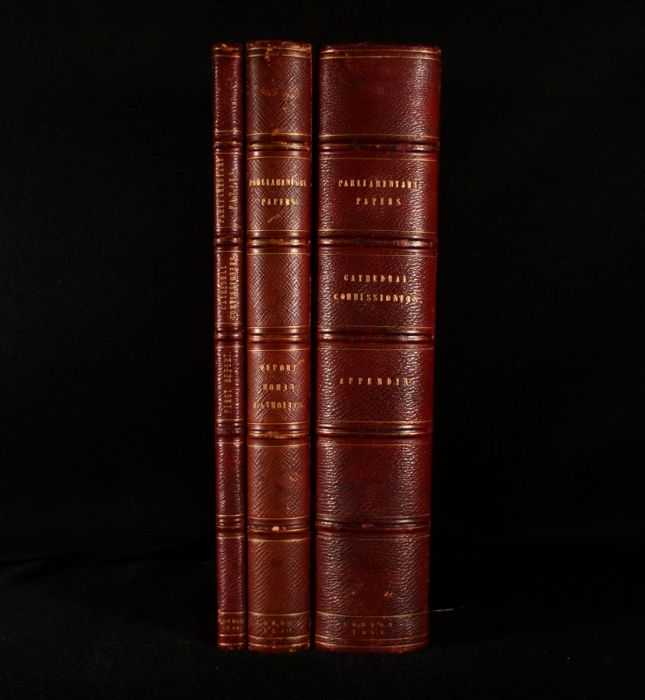 A collection of three political reports from the late Georgian era, reprinted during Queen Victoria's reign.

These reports offer insight into the relationship between politics and the church in the first half of the nineteenth century.

Illustrated with one colour folding map to the appendix volume.

The 1851 volume looks at Roman Catholics, which summarises the laws and regulations that try to balance the power between the state and the church in Europe and the British colonies.

The 1854 volumes focuses on cathedral commissioners, with the appendix present in a separate volume. This volume looks into the revenues and expenditure of cathedrals and collegiate churches, and various other political questions regarding churches and cathedrals in England and Wales.

In a quarter morocco binding with cloth to the boards. Externally, generally smart. Light rubbing and marks to the boards and spines. Minor bumping to the extremities. Bookplate to the front pastedowns. Stamp to the verso to the front endpapers. Internally, firmly bound. Pages are bright and generally clean with some odd spots, mostly to the first and last few pages.