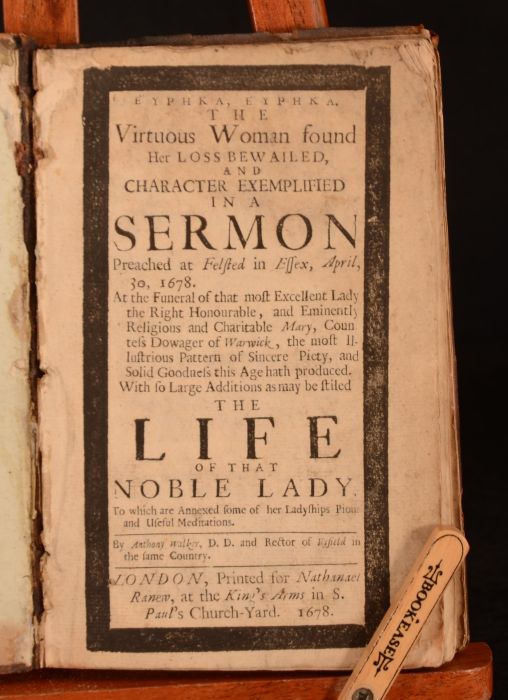 The very first printing of Mary Rich's works. With black borders to the title page, an indication of respect and mourning. This work has been written and compiled by Anthony Walker who delivered the sermon at Mary's funeral. Mary was the Countess Dowager of Warwick, and is referred to in the title page as 'that most excellent lady, the right honourable, and eminently religious and charitable.. the most illustrious pattern of sincere piety, and solid goodness this age hath produced'. Walker has also written a biography on Rich appended to the sermon, followed by her own writings. Being the first publication of Mary Rich's selected works, her scriptural and occasional meditations, in addition to her spiritual instructions to George, earl of Berkeley. Also known under the title 'Eureka Eureka' or 'Eurhka Eurhka'. ESTC no. R233189 Bound without endpapers. Lacking the portrait frontispiece in addition to the first and final blanks according to the ESTC collation. With the register: A3-A8, B-P8. With a separate title page for 'Occasional Meditations Upon Sundry Subjects' by Mary Rich and a separate half-title to 'Pious Reflections'. Both of these title pages are included in the register. Mary Rich, (Nee Boyle), 'attained almost legendary status as a pattern of the saintly life' in her own lifetime, which is characterized by her 'homely analogies from housewifery and other feminine concerns to draw godly morals' (DNB). Rich is probably best known for her diaries kept between 1666 and 1677, as they are regarded as an important historical source due to her supplying of precise dates for public and domestic events after the Restoration. 'Women's Life Writing' by Linda S Coleman notes that 'The ostensibly private nature of woman's written subjectivity, is through the printed funeral sermons, publicly authorized and celebrated'. This is therefore why Rich's writings were able to be published and are a very scarce example of a seventeenth century woman's musings. A fascinating example of a mourning publication from the seventeenth century, and a scarce printing of Mary Rich's 'Occasional Meditations'. Important, as Rich is better known for her diary.

In a nineteenth century quarter straight grained morocco binding and marbled front board. Contemporary sheep rear board has been retained. Externally, rubbed to the extremities and spine. Small loss to the rear board. Hinges are slightly strained but firm. Internally, generally firmly bound with a few gatherings starting to work loose, mostly to the first and last few gatherings. A few handling marks to the title page. Small chip to the bottom of B8, not affecting text, to margin only. Closely cropped to the gutter of H2 affecting the first words of the final two paragraphs. The final leaf of the publisher's adverts have been pasted to the rear pastedown. Pages are bright with just the odd spots.