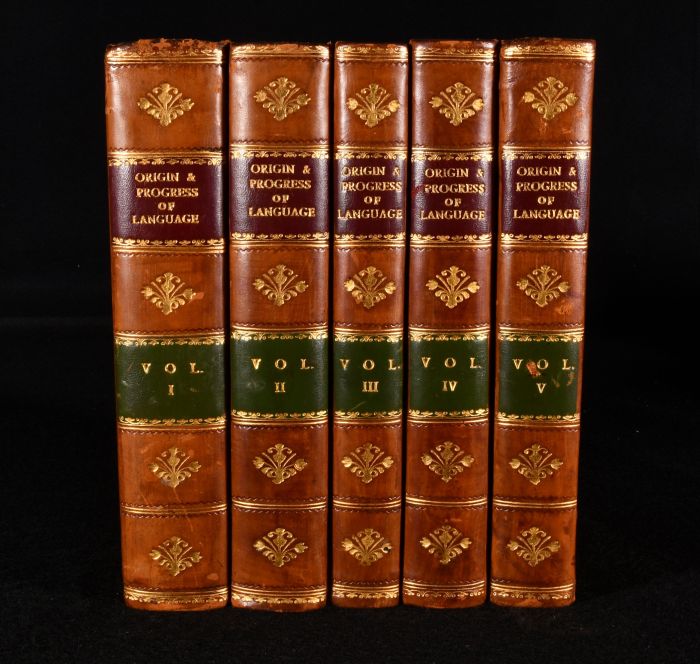 A scarce work, particularly in such a lovely condition. Written by James Burnet/Burnett, Lord Monboddo. Burnett was the first to note that several languages create length words for simpler concepts. He proposed that in early languages clarity was imperative and the redundant extra syllables were added later. For this work, Monboddo studied languages of the European colonies including the Tahitians, Caribs, Eskimos, and Huron/Wyandot People. He compares the structure of their languages to European languages in addition to tracing the evolution of modern European language. There is a particular focus on ancient Greek. It is from this study that Monboddo drew his hypothesis which is now known as the 'single-origin hypothesis'. It is thought that he was the first to formulate this hypothesis. Many credit Burnet for anticipating the idea of natural selection which was later developed by Charles Darwin. With an errata leaf to volume V which also notes cancel leaves. Volumes I and III are stated second editions to their title pages. The ESTC notes that volumes I and III were reprinted as a 'second' edition in 1774 and 1786 as the publishers discovered they had not printed a sufficient number. Therefore some sets, alike to this, have mixed sets (Alston, ESTC no T42128). Volumes II, IV, and V are first editions. Volume I is dated 1774, Volume II is dated 1774, Volume III is dated 1786, Volume IV is dated 1787, Volume V is dated 1789 With the bookplate of Henry Hippisley Coxe of Ston Easton to the front pastedown. Henry Hippisley Coxe was MP for Somerset for three years. He was the son of John Hippisley Coxe who built the mansion house Ston Easton Park (Somerset). Coxe inherited Ston Easton and other estates following his brother Richard Hippisley Coxe's death. An in-depth analysis of the history of language, and its development worldwide.

In full tree calf bindings. Expertly rebacked with the original boards preserved. Externally, in a lovely condition with just some minor shelfwear to the spines. A Little loss to the spine label of volume V. Prior owner's bookplate to the front pastedown of all volumes, Henry Hippisley Coxe. Internally, firmly bound. Pages are bright with just the odd light spots.