1650 French-English Dictionary, With Another in English and French. Whereunto are Newly Added the Animadversions and Supplements

London   Octavian Pulleyn
12.5" by 9" Unpaginated
The third edition of Randle Cotgrave's important English-French dictionary, a groundbreaking dictionary work that paved that way for the modern dictionaries, with Robert Sherwood's 'A Dictionary English and French'.
£595.00
: 3kgs / : 659P17
Add to Wish List 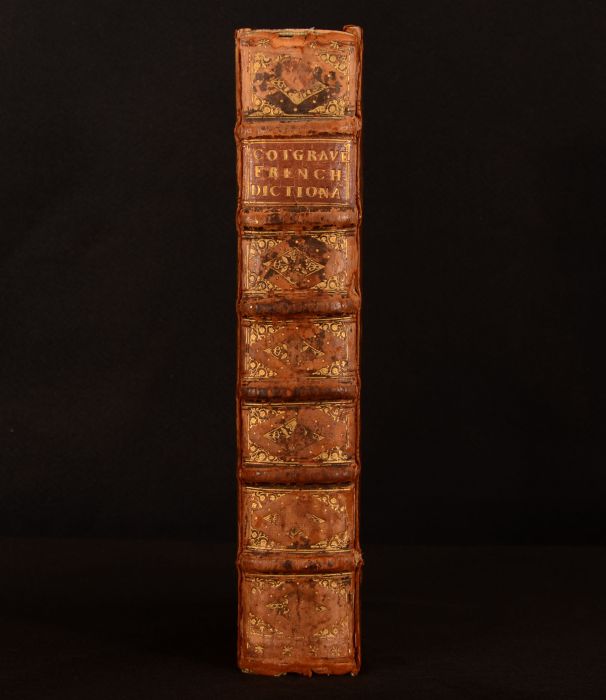 The third edition of this work. Complete as two volumes in one. The signatures for this work run as a-d4, B-Z4, Aa-Zz4, Aaa-Zzz4, Aaaa-Xxxx4, A-Z4, Aa-Gg4, [Hh1]. Printed in triple column. With woodcut initials and head-pieces. Title page framed within woodcut ornamental border. Printer's device on title page. With 'A Dictionary English and French; Compiled for the Commodity of All Such as are Desirous of Both Languages' by Robert Sherwood bound to the rear with a separate dated title page and seperate register. Collated from Jisc from a copy held at the University of Cambridge Libraries, complete. With an armorial bookplate to the verso of the title page, 'The Right Honorable William Lord Craven, Barron Craven of Hamstead Marshall'. This is the aormial bookplate for the second Baron Craven, 1668-1711. Craven was a British Peer, and also held the title of Viscount Uffington. He was a captain in the Berkshire Regiment of Militia, and was appointed a Deputy Lieutenant of Warwickshire and Berkshire, as well as the Lord Lieutenant of Warwickshire. Craven married Lady Emily Mary Grimston, who was the daughter of the First Earl of Verulam James Grimston. Together they had nine children, including George Grimstone Craven. His father, also named William Craven, fell in love with Elizabeth of Bohemia, and built the house at Hamstead Marshall in her honour. This bilingual dictionary was a breakthrough in lexicography works at the time, and remains important for its historical significance. It was unusual for its careful and intelligence research into lexicography. The work was first published in 1611. Containing around one-million words, it was the most extensive French word list of its time. On this scale, it greatly exceeded any of its predecessors of English-French dictionaries, of which there were roughly three. It is still used as a resource for cultural historians, with an insight into the day-to-day life of Jacobean Europe. In fact, Cotgrave was very widely read, and included archaic words in all dialects, rather than utilising only contemporary words. The work was so popular and influential that it dominated the French dictionaries throughout most of the seventeenth century. In Cotgrave's work we provides the meaning of each word in French, detailing the gender of the nouns, and the formation of the feminine form of the adjectives. Cotgrave also gives proper names, idioms and proverbs, and also notes when words are dialect and from in France the words originate from. With 'A Dictionary English and French', by Robert Sherwood. Robert Sherwood was a lexicographer who wrote his appendix for the second edition of Cotgrave's work. He was the first lexicographer who compiled a word list that appeared in a bi-directional bilingual dictionary, with English set before French. Randle Cotgrave is best known for this work. After graduating from University, he became a secretary to William Cecil, Lord Burghley. Cotrgave dedicated this work to Burghley, stating that he owes much to Burghley's patronage. Revised and enlarged by James Howell, who was an Anglo-Welsh historian and writer. A third edition of this important dictionary.

In the original full calf binding. Externally, generally smart. though with cracks to the joints. Rubbing to the spine. Small patches of rubbing and marks to the boards. Light loss to the head and tail of the spine. Minor bumping to the extremities. Hinges are strained but remain firm. Label to the front pastedown. Internally, firmly bound. Pages are very lightly age-toned and clean, with only the very odd light spot. Bookplate to the verso of the title page. Small loss to the title page, not affecting text. Tidemark to the title page. Mark to the verso of leaf a4. Small loss to head of leaf Oo2, only affecting two letters in the header.