The store will not work correctly in the case when cookies are disabled.
By Owen Felltham
London   Peter Dring; A. Seile
11" by 7.5" [8] 176, 171-374, [375-376] (2) 375-394, 102pp. (2)
A very important edition of this collection of short essays, and the first to include Lusoria and A Brief Character of The Low-Countries Under The States. The work is considered a pioneering piece in the genre of literary essays, with this being a particu
By Owen Felltham

1661 Resolves: Divine, Moral, Political The Eighth Impression. With New and several other Additions Both In Prose and Verse Not Extant in former Impressions 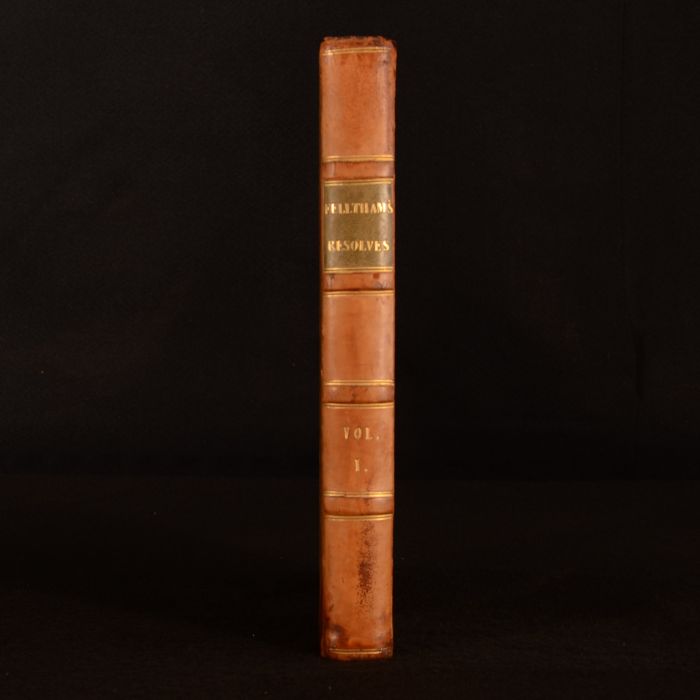 The eighth impression, much enlarged. First published in 1623. Very scarce. ESTC Citation No. R25396. ESTC refer to this work as a folio, however signatures finish on N4 as called for. Collated, lacking front blank and final two leaves containing the index. Engraved title page and additional title pages for Lusoria and A Brief Character Of The Low-Countries Under The States are present. This particular state of the eighth impression also contains the unusual letterpress title page. Collation irregular as called for."Lusoria: or Occasional pieces" has separate pagination and register, and dated title page with imprint "printed for Anne Seile". "A brief character of the Low-Countries under the States" has separate dated title page on leaf f1r; pagination and register are continuous from "Lusoria". Contains final errata leaf. Spine incorrectly states this work as volume one although there are no further volumes to the work. Owen Feltham was an English author, best known for this work 'Resolves: Divine, Moral, Political'. The work contains one hundred and forty six short essays and was was extremely popular upon publication. Feltham was only a teenager when the work was first published, but the essays had a profound impact upon the development of the English essay as a genre. The included works are short commentaries regarding what Feltham perceived to be the three major realms of life; divine; ethical; and political. The aim was to help create a more 'tolerant humanism'. Many of Feltham's views were fairly progressive indeed Feltham's resolve entitled 'Of Marriage and Single Life' observes the disparities of his time in regards to gender equality. Perhaps the most cited essay included is that entitled "How the Distempers of these Times should affect wise Men" and was included in John Gross' The Oxford Book of Essays. This 1661 edition is particularly interesting, with scholars noting the difference in tone from earlier editions, moving from formulaic vows of piety to constructed extended prose arguments; something which help with the development of the essay as a literary genre. This 1661 eighth impression is a particularly important edition of the work; being the first edition to include both Lusoria and "With a Taste of some Letters, and a brief Character of the Low-Countries" although both had previously appeared separately. Lusoria contains a collection of forty two poems along with personal correspondence and biblical commentary. The genre is incredibly varied and includes love poems as well as epitaphs and a number of elegies. Many have noted the poems point to Feltham as an English Royalist. The work also contains A Brief Character of the Low-Countries under the States. Whilst the exact date of this work is unknown, pirated copies have been traced as early as 1648. The work focuses on vices in the food, language, government and character of the Dutch, written in an often amusing style. The work is noted as being a very early example of a character study of a particular nation. This book is a particularly important edition of a highly influential collection of literary essays, containing nearly all of Felltham's literary output. The work is credited as being a forerunner in the genre of literary essays, as well as being a fascinating insight into seventeenth century thought. A very scarce example of an influential and pioneering work.

Rebound in a half calf binding with marbled boards. Externally very smart with slight rubbing to the extremities and boards. Internally firmly bound. Pages generally bright and clean with marginal age toning and the odd spot. Lacking front blank and final two index leaves. Title page has been laid down. The occasional area of damp staining, heavier to the first six leaves. Contemporary ink spill to title page. Occasional area of worming to the extremities, not affecting the text. Professional repair to errata leaf.