The store will not work correctly in the case when cookies are disabled.
By W. Jos. Grand
Chicago   Thos. Knapp Ptg. & Bdg. Company,
8" by 5.5" 314pp. [18 pages of trade advertisements]
A fascinating work, very scarce, on this landmark in 1890's Chicago.
By W. Jos. Grand

1896 Illustrated History of the Union Stockyards Sketch-book of Familiar Faces and Places at the Yards Not Forgetting Reminiscences of the Yards, Humorous and Otherwise, Joe Getler and His Cats, the Hustling Commission Men, the Widow of the Deceased, the Belle of the Stockyards; Beside Valuable Hints to Farmers on Breeding, Selling, Shipping and Conditioning, and Veterinary Recipes; and Con- cluding with the Man of "Ups and Downs." 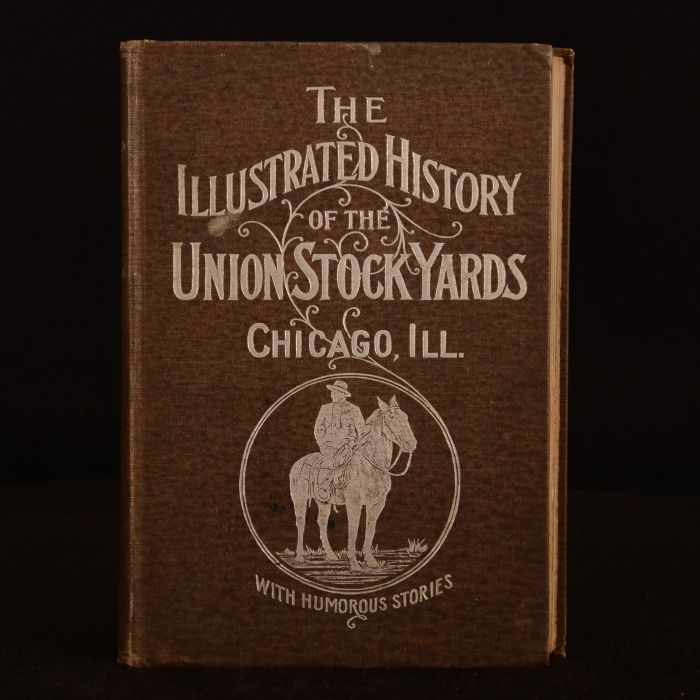 Containing humorous tales from the Union Stockyards in Chicago, or (as proclaimed in the text): "The Greatest Live Stock Market in the World". The Union Stock Yards, or "The Yards", was the primary meatpacking district in Chicago for more than a century after opening in 1865. The yards became so large and influential that Chicago hence become known as the "hog butcher for the world" and the center of the American meatpacking industry for many years. Featuring contemporary trade advertisements to the rear, for 'Carriage and Saddle Horses', 'Packers', 'Fertilizers', and 'Live Stock Commissioners'. One of the advertisements featured is that of 'Armour and Company', one of the five leading firms in the meat-packing industry. Originally founded in Chicago in 1867, the company became one of the cities most important industries, making the titular 'Union Stock Yards' of this text the center of America's meatpacking industry. Collated, complete with numerous monochromatic illustrations form photographs by O. Benson, Jr. Also containing a loosely inserted newspaper clipping from the 'Evening Dispatch' newspaper, dated 'Friday, November 6, 1953'.