1839 Observations on the Financial Position and Credit of Such of the States of the North American Union as Have Contracted Public Debts: Comprising an Account of the Manner in Which the Sums Raised by Each State Have Been Applied, and a Conservation of the Probable Effects of Such Application Upon the General Wealth and Prosperity of the Country

London   Longman, Orme, Brown, Green, and Longmans
9" by 5.5" viii, 455pp, 16pp
The first edition of Alexander Trotter's fascinating look at the financial situations of the United States at the beginning of the nineteenth century.
£360.00
: 1kgs / : 645P3
Add to Wish List 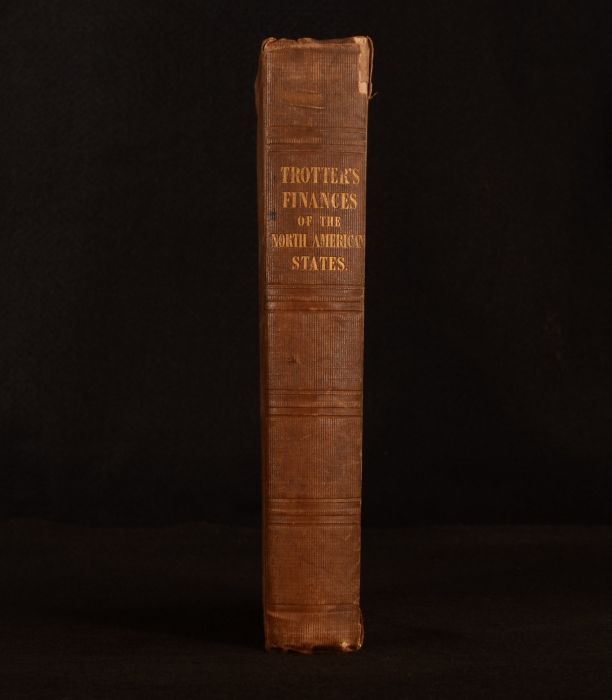 The first edition of this work. An interesting work examining and describing the financial situation of the USA at the beginning of the nineteenth century. It looks at both central banking and the institutions of individual states, considering theories of public works, banking policy, and conducts statistical surveys of several states. The author ends by looking at possible solutions to the debts, discussing the impacts these solutions would have on the states. With a folding colour map to the frontispiece. Written by Alexander Trotter. With two newspaper clippings, tipped in to the verso to the front endpaper, and to the half-title. One clipping is from the 30th March 1930, and is titled, 'American Bonds in Default'. The second clipping is dated the 20th September 1931, and is titled, 'Debts Default in U.S.A., Eight Southern Stats Repudiated, an Old Scandal, But Payment Still Demanded'. With sixteen pages of publisher's adverts to the rear.

In the original cloth binding. Externally, generally smart. A little loss to the head of the spine to the front joint. A little discolouration to the boards and spine, and light spotting to the extremities of the boards. Newspaper clipping tipped in to the verso to the front endpaper. Internally, firmly bound. Pages are lightly age-toned and generally clean with just the very odd light spot. Newspaper clipping tipped in to the half-title. A little edgewear to the folding map. Institutional stamp to the title page.