The store will not work correctly in the case when cookies are disabled.
By Edmund Burke
London   J Owen
9" by 5.5" [3], 2-80pp
A first edition, early printing of Edmund Burke's public rebuttal regarding attacks made regarding his pension.
By Edmund Burke

1796 A Letter from the Right Hon Edmund Burke to A Noble Lord On the Attacks made upon him and his pension, by the Duke of Bedford and the Earl of Lauderdale, early in the present sessions of parliament. 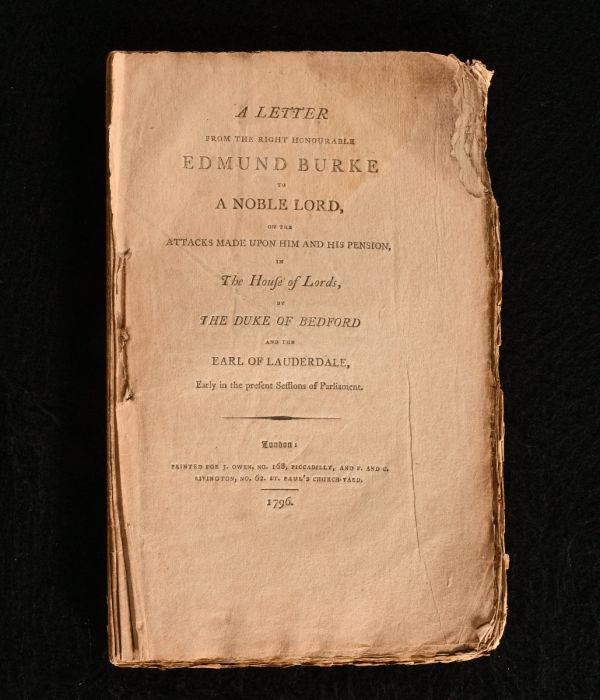 Catchword 'NT' to page 49, and signature D2 is signed on the recto only.

Upon Burke's retirement from Parliament in 1794 he received a pensions from Pitt's government. The Duke of Bedford and Earl of Lauderdale were two of many peers that criticized this grant as it was 'inconsistent with Burke's own principles of economical reform'. The Concise Oxford Companion to English Literature refers to this work as 'one of the greatest masterpieces of irony and feeling in the English language, comparing his own services to the state with those rendered by the duke of Bedford and his house, which had been the recipient of enormous grants from the Crown.'

Disbound. Externally, chipped to the top of the fore edge. Mark to the rear page. Internally, firmly bound. Pages are generally bright with just a few light marks to pages.