The store will not work correctly in the case when cookies are disabled.
By Bernard Nieuwentyt
London   J. Senex
8" by 5" [20], xl, lii, 336, [12]; [16], 367-733; [17], 736-1086pp
The first English edition of this monumental and influential philosophical work, discussing how natural science can fit into religious beliefs. Illustrated throughout with folding plates.
By Bernard Nieuwentyt

1718-19 The Religious Philosopher; or, the Right Use of the Contemplation of the World, For the Conviction of Atheists and Infidels 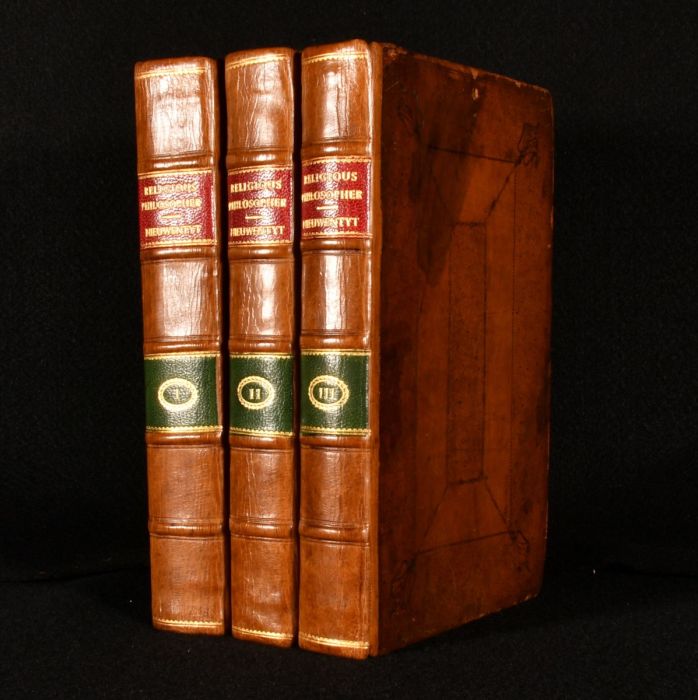 The first English edition of this work, being published three years after the original Dutch edition in 1715.

Volume I illustrated with twelve folding plates, numbered I - XII.

In this work, Nieuwentyt attempts to persuade both Christians and atheists that science and its examination of the natural world can and is compatible with religious beliefs.

Prominent figures from history admired this work, including Voltaire, and William Paley, who was heavily influence by Nieuwentyt's writing. Nieuwentyt's influence is seen in Paley's famous watchmaker analogy.

Translated from Dutch to English by John Chamberlayne.

Prior owner's stamp to the top edge of Volume I, recto to the front free endpaper of Volume I, and to the head of the title page of Volume I, 'John Brown, 1756'. This is possibly John Brown 1723 - 1808, a Scottish-Danish merchant and ship-owner, who was the joint founder of John & David Brown. He was appointed the General War Commissioner in 1776, and was the second-largest landowner in Gentofte, owning the manor how Benzonseje, now known as Risbyholm.

Bookplate to the front pastedown of Volumes II and III, 'Earl of Roden, K. St. P.' This is presumably Robert Jocelyn, the third Earl of Orden, as he was appointed a Knight of the Order of St. Patrick. Jocelyn was an Irish Tory politician, and a strong supporter of Protestant causes.

Bookplate to the reverse of the title page of Volumes II and III, 'Dr Timothy Goodwyn, Lord Arch Bishop of Cashel'. Goodwyn, or Goodwin, became the archbishop of Cashel in 1727, two years before he died in 1729. Goodwyn's wife's (Anne) sister Charlotte married Robert Jocelyn, the first Viscount Jocelyn, who was the father of the Robert Jocelyn who formerly owned this book.

In a full panelled calf binding, rebacked with the original boards restored. Externally, smart. A few minor marks and some light patches of rubbing to the boards. Prior owner's tamp to the top edge of Volume I. Light bumping to the extremities. Bookplate and prior owner's ink inscription to the front pastedown of Volumes II and III, with an ink inscription to the recto to the front endpaper, and a bookplate to the reverse of the title page. Internally, firmly bound. Pages are lightly age-toned and generally clean with some scattered spots and a few light handling marks. Prior owner's stamp to the head of the title page and first leaf of text of Volume I. Bookplate to the reverse of the title page of Volumes II and III. Small chip to leaf I2 in Volume I, affecting three words.