c1910 The Everyman's Library A Selection of Works 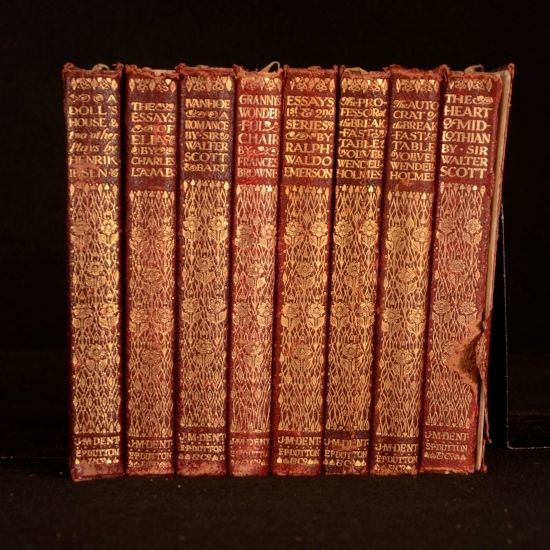 These eight volumes are from a variety of the essay, theatrical, fictional and children's series published by Dent. The works are as follows: A Doll's house and Two Other Plays by Henrik Ibsen The Essays of Elia by Charles Lamb Essays 1st and 2nd Series by Ralph Waldo Emerson The Heart of Midlothian by Sir Walter Scott Ivanhoe A Romance by Sir Walter Scott Everyman's Library by Sir Walter Scott The Autocrat at the Breakfast Table by Oliver Wendell Holmes The Professor at the Breakfast Table by Oliver Wendell Holmes All uniformly bound in the limp morocco binding with gilt stamped detailing to the front boards and spines. The series is a collection of reprinted classic literature. Dent founded the series in 1906 and promised the works to be 'infinite riches in a little room'.

In uniform publisher's limp morocco bindings. Externally, rubbed to the spines. All volumes have a small amount of loss to the head and tail of spines due to rubbing. Patches of lighter rubbing to the joints and extremities. Small amount of light rubbing to boards. Most volumes have the bookplate of prior owner to front pastedown dated 1912. Prior owner's inscriptions to the recto of front endpaper to Emerson and the two Wendell Holmes volumes. Prize bookplate to front pastedown of Scott's work from the Grammar School Ilminster. Front hinge and joint to Midlothian have failed with the board detached but present. Front hinge to Ivanhoe is strained but firm. Offsetting to endpapers. Internally, all volumes are firmly bound. Pages are bright with just the occasional light spots.