The store will not work correctly in the case when cookies are disabled.
By Thomas Archer
London   Cassell and Company Limited
17.5" by 13" 16; 32; 48; 64; 80; 92pp.
The complete set of Archer's charmingly illustrated biography of Charles Dickens, containing facts and anecdotes about the author.
By Thomas Archer

c1890 Charles Dickens A Gossip about his Life, Works and Characters In Six Divisions. 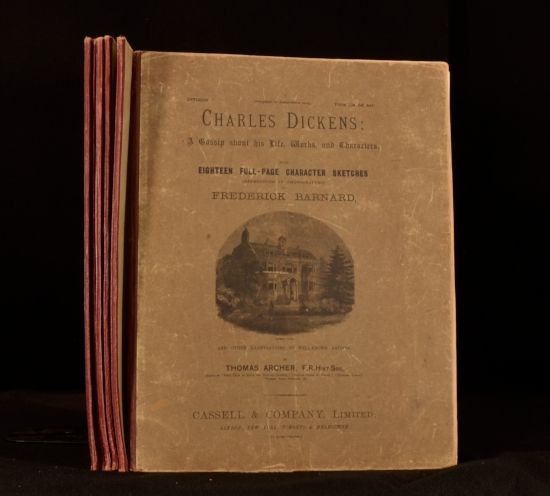 Written and edited by Thomas Archer. Author of "Fifty Years of Social and Political Progress", "Decisive Events in History", "Vanishing London", and "Pictures, Royal Portraits". Complete in six divisions. Originally supplied to subscribers only. Collated complete with a total of eighteen photogravures, and numerous wood-cut vignettes. Illustrated by Victorian illustrator, caricaturist, genre painter, and well known Dickens' illustrator, Frederick (Fred) Barnard. Barnard was commissioned in 1871 by Chapman and Hall to illustrate nine volumes of the Household Edition of Dickens's works, including 'Bleak House', 'A Tale of Two Cities', 'Sketches by Boz', 'Nicholas Nickleby', 'Barnaby Rudge', 'Dombey and Son' and 'Martin Chuzzlewit'. He followed in the footsteps of the respected Hablot Knight Browne ("Phiz") who had worked with Dickens himself. Barnard decided that he would concentrate on scenes other than those that Browne and Dickens had chosen to portray. Whereas 'Phiz' was inclined to create dramatic group scenes for his prints, Barnard was more interested in showing the relationships between pairs of characters. While Phiz had to produce illustrations for the monthly serials as Dickens wrote them, Barnard had the advantage of being able to read the complete work repeatedly before starting on his drawings. At the same time Barnard had to seamlessly blend the characters as visualised by 'Phiz' with his own style, not daring to deviate too much from their established appearance. It was this dangerous, but ultimately successful balancing act that earned Barnard many admirers, and established him as a notable illustrator and artist.

In original quarter cloth bindings with paper covered boards. Externally, sound, with some light marks to the boards. Division one has some heavier sunning to the boards. Internally, firmly bound. Pages bright, with the occasional light scattered spotting and handling marks.