The store will not work correctly in the case when cookies are disabled.
By Anon
London   London Studio
11.5" by 9" 16
A fascinating late Victorian to Edwardian photograph album containing over forty photographs, cartes de visite, and photograph postcards.
By Anon 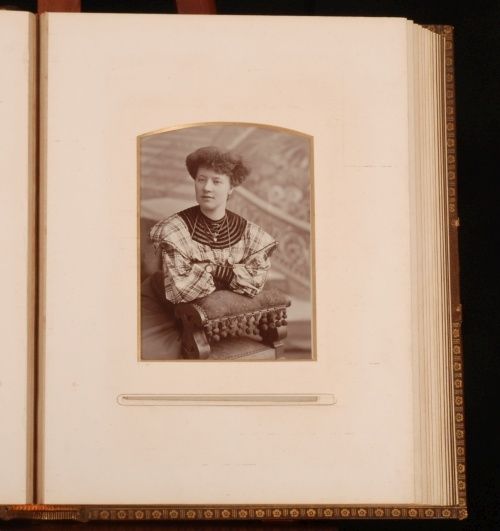 Containing sixteen leaves, with either one, four, or nine rectangular or oval slots on each side, the majority with paper guards. Featuring an assortment of formal and casual portraits and groups, and causal scenes such as boating. Two photographs show regimental uniform, and another Spanish folk costume. A number are trimmed photograph postcards (popular from c1900) with handwriting on the reverse. Containing photographs from the following studios: Killicks and Abbot, Rosslyn Hill Studio, Hampstead, London; Schuth's Photographic Galleries, London and Woking; W. Hobcraft, Oxford Street, London; Beatie and Co; U.S.A. Studios, London and Provinces; Gorsuch, 48 Junction Road, Upper Holloway; W.F. Wood, Day and Electric Light Studios, Edgewear Road and Bishop's Road, London; Hellis and Sons, London; J. Cruickshank Taylor and Sons, Newgate Stree, London; and Hellis and Sons, London. The costumes suggest that the photographs date from c1880 to the Edwardian period, but are not necessarily in chronological order.

In a decorative full leather binding with lovely colour, with gilt edges and decorative endpapers. Externally, only minor shelfwear. Rear half of clasp missing. Internally, firmly bound and generally bright, with the odd handling mark and occasional light spot. A few small closed tears to slots. A lovely item.