c1870 The Fables of La Fontaine 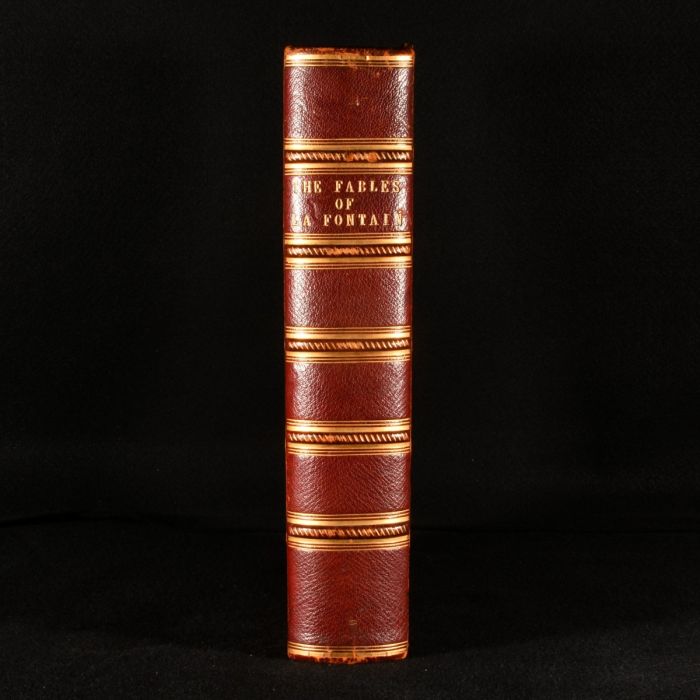 An undated volume, dated from copies on Jisc c1870.

A lovely volume printed on large paper containing various fables by French author Jean de la Fontaine, one of the most popular poets of the seventeenth century. Translated into English by Walter Thornbury.

With biographical notes on Jean de la Fontaine and Aesop, and a dedication to Monseigneur the Dauphin.

Jean de la Fontaine collected fables from Western and Eastern sources and adapted them into French free verses, which were issued in several volumes. These are considered classics of French literature, and are published in one large volume in this edition.

Under Jean de la Fontaine, these fables took a humorous, nuanced, and ironical tone, and were generally aimed at adults, but later also entered the educational system and were learned in school by children.

With titles such as 'The Grasshopper and the Ant,' 'The Raven and the Fox,' 'The Frog who wished to Make Herself as Big as the Ox,' 'The Two Mules,' and many others.

Profusely and stunningly illustrated throughout by Gustave Doré. Collated.

From the library of Eric Kenneth Prentice Back. Kenn Back was a British meteorologist with the British Antarctic survey for many years.  He spent eight winters in the Antarctic and is a descendent of Captain George Back. In addition, he served as base commander at Halley, Faraday and Rothera stations.  His library collection was built over decades and highlights his love of polar exploration.

In half morocco binding over cloth covered boards, with gilt and five raised bands as well as gilded edges and marbled endpapers. Externally lovely with only minor shelfwear and only minor rubbing to the leather to spine to the front and rear joint. Slight damp marking to the rear board. kenn Back's bookplate to the front pastedown. Internally, firmly bound. The pages are generally clean throughout, with some light foxing to the first and last few leaves, and the occasional odd spot, as well as some tone ageing to the occasional leaf, as usual due to the type of paper used. Profusely and stunningly illustrated throughout by Gustave Doré. Collating complete.