The store will not work correctly in the case when cookies are disabled.
By Owen Angel
Exeter   Privately Printed
6" by 4.5" Unpaginated
A very scarce, original Victorian photo-album depicting Thomas Tatem's family by Exeter based photographer Owen Angel. .
By Owen Angel 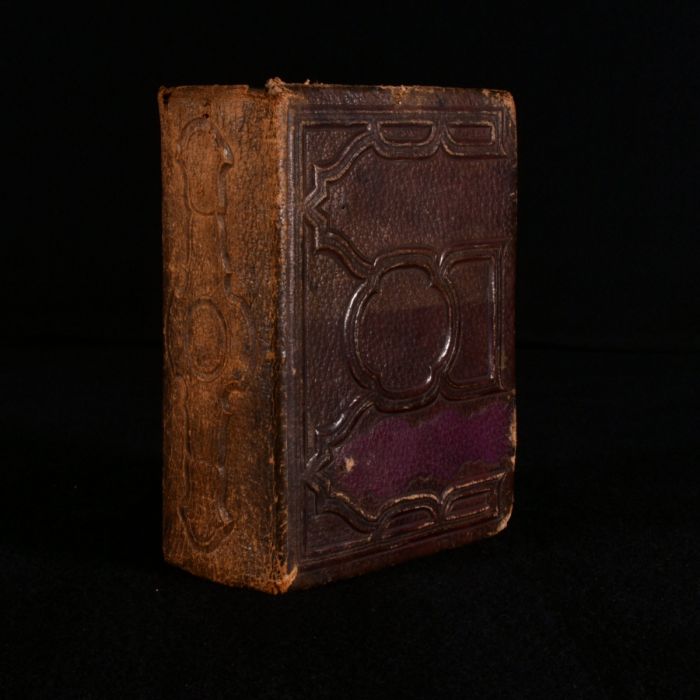 An exciting and very scarce original Victorian photobook depicting the family of Thomas Tatem (1841-68). He was born in Appledore, Devon, and passed away in the same area. He was the son of James and Ann Tatem, married to Louisa Cock, and had four children. A copy dated and identified by an inscription to the front pastedown 'Thomas Tatem, Appledore Devon, 10th March 1864.'

The pictures were taken by Owen Angel in High Street. Angel was an engraver and printer in Exeter before he started his career as a photographer in 1855, advertising  "daily photographic portraits" in the Trewman's Exeter Flying Post. From 1861 to 1889, his business was situated at 11 High Street, which is were the present pictures were taken with the aid of his wife and daughter. He died in 1909.

With forty-seven photographs inserted into thick paper, the photos shown to the recto and verso of each leaf.

In need of a rebinding.


From the library at Julian Park, Hertfordshire, belonging to Audrey Pleydell-Bouverie. Audrey was the youngest daughter of an Anglo-American lumber and steel millionaire, sister to Edward James, a key figure in the Surrealist movement, and the illegitimate granddaughter of King Edward VII.

She was an English socialite known for her beauty and for charming various wealthy men, she was included in The Book of Beauty by Cecil Beaton. A patron of the arts, she assisted Viscount Carlow financially in the publication of limited editions of numerous works by leading literary figures such as T E Lawrence, James Joyce, Wyndham Lewis, and others. A hedonistic pursuer, she was recognised as one of the 'Bright Young Things'.

In the original publisher's full morocco binding, embossed to the spine and boards. Externally rather worn, with some shelf wear and chipping, a minor closed tear and some fading to the spine. Inscribed by the previous owner to the front pastedown, dated 1864. Internally, the binding is split into four, the back strip detached. With minor soiling to the leaves and some chipping to the pages, one photograph is loose. With forty-seven photographs inserted into thick paper, the photos shown to the recto and verso of each leaf.