The store will not work correctly in the case when cookies are disabled.
By C A Stothard
London   J M'Creery
15" by 12"
An exceptional association copy of C A Stothard's important twelve part work on British effigies. From the library of Dante Gabriel Rossetti, with an inscription from his supporter and admirer, John Ruskin.
By C A Stothard

1817-1832 The Monumental Effigies of Great Britain

London   J M'Creery
15" by 12"
An exceptional association copy of C A Stothard's important twelve part work on British effigies. From the library of Dante Gabriel Rossetti, with an inscription from his supporter and admirer, John Ruskin.
£12,500.00
: 7kgs / : 729L8
Add to Wish List 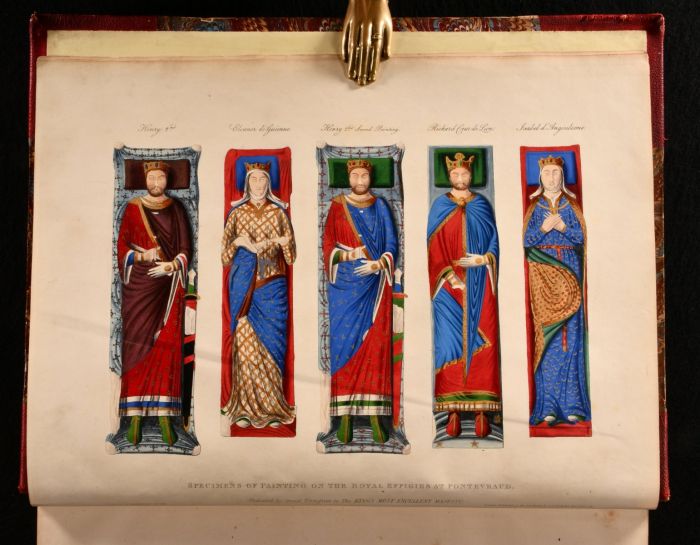 Inscription to the recto of front endpaper reads, 'DG Rossetti, From John Ruskin - 1856'. Rossetti is noted for founding the Pre-Raphaelite Brotherhood with William Holman Hunt and John Everett Millais. He was the core inspiration for a second generation of artists and writers such as William Morris and Edward Burne-Jones. Ruskin was one of Rossetti's early supporters and wrote to 'The Times' defending the work of the Pre-Raphaelites. Rossetti drew influence from Ruskin's theories and they had a close relationship in the early days of Rossetti's career, however some critics now claim that Rossetti merely tolerated Ruskin for the sake of his patronage. This inscription is dated after the original Pre-Raphaelite Brotherhood had mostly dissolved and near the end of Ruskin and Rossetti's relationship.

This gift from Ruskin would have been a key sourcebook for Rossetti, who became an inspiration for the medievalising strand of the Pre-Raphaelite movement after 1856, the year this inscription is dated. Rossetti's colleagues, Hunt and Millais, had moved away from direct imitation of medieval art, and it was Rossetti who took inspiration from the Medieval.

With the bookplate of Charles Eamer Kempe, a stained glass artist and manufacturer. Kempe bought Lindfield, Sussex, in 1875. Guests to his home include William Morris and William de Morgan. It was Rossetti that inspired Kempe to make a career from ecclesiastical decoration after seeing hthe designs he, William Morris and Edward Burne-Jones made for the Debating Chamber of the Oxford Union.

This book was originally sold at 'The Valuable Contents of the Residence of Dante G Rossetti, 16, Cheyne Walk, Chelsea, to be sold at Auction by Messrs. T.G. Wharton, Martin & Co., 5-7 July 1882, Lot 486'. A facsimile of the catalogue from this sale accompanies the book.

Collated, complete, with an engraved portrait plate and 147 hand-coloured or tinted plates.

This was Stothard's principle publication, and was issued in parts originally. His widow, Anna Eliza, brought the work to completion.

A fantastic work, which truly highlights the beauty in Britain's medieval Effigies. Stothard depicts and describes effigies from cathedrals and churches from the Norman Conquest to the Tudor era.

In a half morocco binding, with paper covered boards. Externally, very smart with light rubbing to the joints, extremities and raised bands. Internally, firmly bound. Pages are very bright. A few light marks to the endpapers, otherwise just the odd spot to pages.