The store will not work correctly in the case when cookies are disabled.
By Vere Monro
London   Richard Bentley
8" by 5" [7], vi-xiii, [2], 2-316; [7], vi-xii, [1], 2-311p
The desirable first edition of Vere Monro's travel documents of Syria, visiting places mentioned in the Bible and noting their condition and culture in the early nineteenth century.. Illustrated with a frontispiece to each volume.
By Vere Monro

1835 A Summer Ramble in Syria, With a Tartar Trip From Aleppo to Stamboul 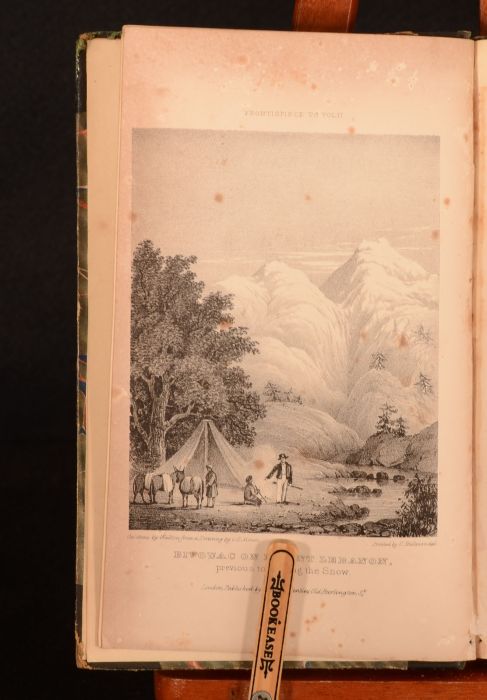 The first edition of this work. Complete in two volumes. This work is a fascinating study into Syria in the early nineteenth century, looking in depth at the character and culture of the country, at a time when England's interest in the Middle East was rising. In particular, the author wished to see and document the condition of the places hallowed by Spiritual writings. Documents the author's travels to the banks of the Nile, Damietta, and Jerusalem, where he visited places mentioned in the Bible as scenes of remarkable events. Though this work wasn't noted for adding any new information to the existing travel works of the time, it has been acknowledged that the author's story telling abilities make for a great adventurous work, and thus makes it an excellent addition to a travel library. Monro's writing style in this work was applauded for being lively and conversational. Written from the perspective of a Western person travelling, thus showing ideology typical to the time. Each volume with the rarely seen half-title. With a lithographic frontispiece to each volume. Reverend Vere Monro was a well travelled man, having visited Spain, Italy, Greece, Egypt, and Ethiopia. He entered University College Oxford in 1819, and graduated with an MA in 1826. He was ordained in 1825. and was appointed curate of Stokesley in the Diocese of York in 1826. This is an octavo, Volume I with the signatures from B-X8, with a a front endpaper, front free endpaper, rear free endpaper, and a rear endpaper. Volume II with the signatures from B-X8, with a a front endpaper, front free endpaper, rear free endpaper, and a rear endpaper. Bookplate to the front pastedowns, 'Francis Ravenscroft' with the Latin motto 'Perseverantia Industria et Fidelitas', which translates as 'Persistence, Industry, and Fidelity'. This is probably Francis Ravenscroft who was of relation to the Ede and Ravenscroft wig and gown suppliers that was based in London. Francis had a great business flair, part owner of the company, and joined the London Mechanics' Institution as a student in 1848. He became Governor of Birkbeck College a year later, and held the position for half a century. His donations guaranteed the development of new premises at the College on Fetter Lane. In 1851, the Ravenscroft founded Birkbeck Bank. A brightly described travel document of Vere Monro's experiences in the Middle East in the nineteenth century.