The store will not work correctly in the case when cookies are disabled.
By Samuel Clarke
London   James Knapton
7.5" by 4.5 [16], 264pp
A very scarce first edition of Samuel Clarke's engaging work discussing theology and the existence of God, this copy previously owned by Isaac Hawkins Browne.
By Samuel Clarke

1705 A Demonstration of the Being and Attributes of God: More Particularly in Answer to Mr. Hobbs, Spinoza, and Their Followers. Wherein the Notion of Liberty is Stated, and the Possibility and Certainty of it Proves, in Opposition to Necessity and Fate. Being the Substance of Eight Sermons Preach'd at the Cathedral Church of St. Paul, in the Year 1704, at the Lecture Founded by the Honourable Robert Boyle 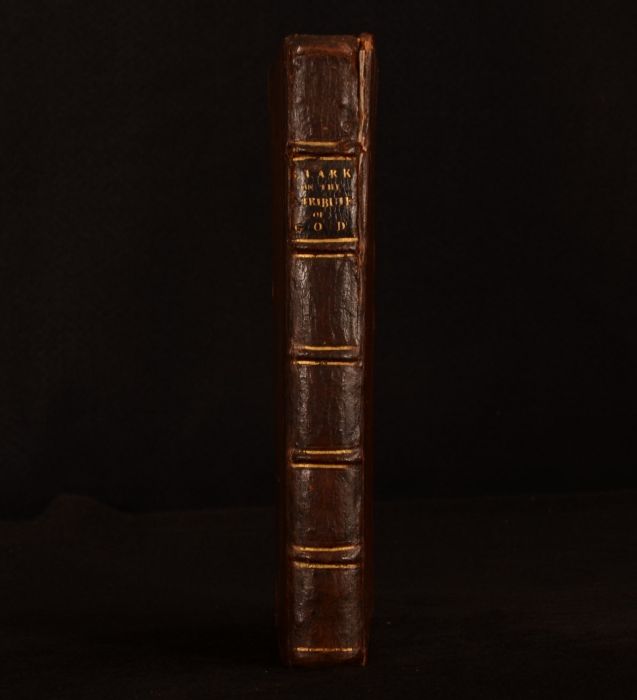 A very scarce work. The first edition of this work. 'A Demonstration of the Being and Attributes of God' is a work on natural theology, discussing God and the attributes that are often ascribed to him, as well as trying to prove the existence of God. Such attributes are how God is eternal, intelligent, a free agent, all-powerful, just, good, and wise. The subject of the existence of God was coming under fire in the eighteenth century, with the rise of the industrial revolution, and with the study of science becoming more in-depth. This was written partly in response to Baruch Spinoza's rationalism thinkings in sixteenth century philosophy, and to Thomas Hobbes, a philosopher who is considered to be one of the founders of modern political philosophy. Both Spinoza and Hobbes were accused in their life of being atheists, something that was very frowned upon at the time. Samuel Clarke then wrote this as a response to their philosophy and publications, attempting to prove the existence of God by physico-theology, with arguments based on reason and experience of nature. Written by Samuel Clarke, a philosopher and Anglican clergyman, considered to be one of the three major figures in British philosophy, alongside John Locke and George Berkeley. Prior owner's ink inscription to the rear pastedown, 'Isaac Hawkins Browne, Feb. 8th 1764'. This is the politician, essayist, and industrialist Isaac Hawkins Browne, who published collections of religious essays in his life. He studied at Oxford, after which he took a tour of the continent. Settling down in Shropshire, he was the sheriff for the county in 1784, and sat in the House of Commons for Bridgnorth from 1784 to 1812, supporting William Pitt, the Prime Minister. He was well known for his reputation of superior knowledge and sound judgement. An octavo. Prior owner's blind stamp to the front endpaper, 'Sewards End Farm, Saffron Walden, Essex'. Sewards End is a small village in Essex, two miles from the centre of Saffron Walden. Collated from the ESTC listing under the citation number T116144, complete, with the signatures A-S. A scarce first edition of Samuel Clarke's important lecture on the existence of God, written in response to the atheists of his day.

Rebacked full calf binding. Externally, generally smart. Crack to the head of the front joint. Some light surface cracks to the spine. Minor bumping to the extremities. A couple of light marks to the boards. Blind stamp to the front endpaper. Prior owner's ink inscription to the rear pastedown. Internally, firmly bound. Pages are age-toned and generally clean with just the odd light spot. Small amount of loss to the head of the front endpaper and title page.