The store will not work correctly in the case when cookies are disabled.
By Lewis Carroll
London   Jonathan Cape
12" by 8" [8], 9-336pp
A signed first edition thus of Ralph Steadman's illustrated works by Lewis Carroll, including the 'Wonderland' novels. Illustrated in colour and monochrome throughout.
By Lewis Carroll

1986 The Complete Alice and the Hunting of the Snark 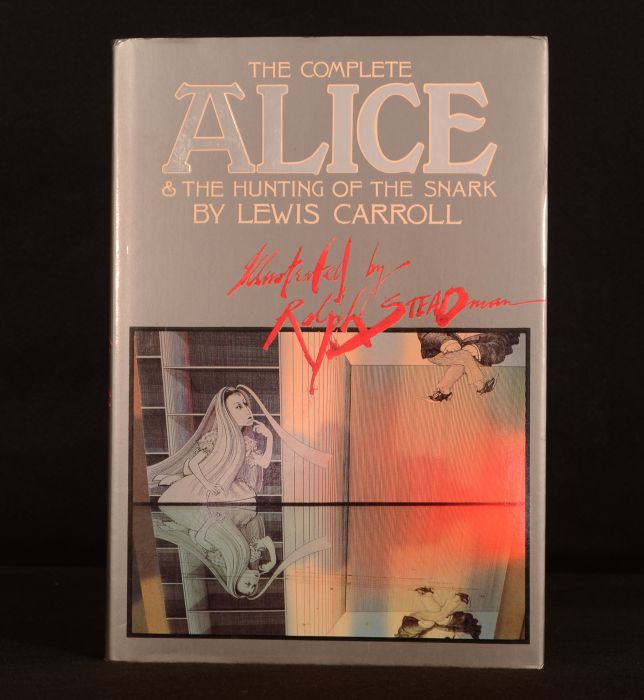 The first edition thus, being the first collected edition of Steadman's illustrated works of Carrolls. Signed by Ralph Steadman to the recto to the front endpaper, 'John + Felicity, from Ralph Steadman', with a doodle accompanying the signature. Illustrated in colour and monochrome throughout. Held in the original publisher's unclipped dustwrapper. A collection of the Lewis Carroll works that Ralph Steadman published illustrated editions on, 'Alice's Adventures in Wonderland', 'Through the Looking-Glass', and 'The Hunting of the Snark'. 'Alice's Adventures in Wonderland', is one of the best known children's books of all time, and has become the favourite to children and adults alike. It follows Alice as she falls through a rabbit role into a strange world with talking animals and magical potions. 'Through the Looking-Glass' is the sequel to 'Wonderland', when Alice enters the fantastical world again by climbing through a mirror. 'The Hunting of the Snark' is a poem that is typically known as a nonsense poem. Lewis Carroll was the pseudonym for Charles Lutwidge Dodgson, who is best known for his 'Wonderland' books. His books are of the nonsense genre, playing with logic and fantasy. It's the general belief that his character Alice was based off Alice Liddell, a relationship that has caused a great amount of controversy. Illustrated by Ralph Steadman. Steadman is a Welsh illustrator, who is best known now for his illustrative collaboration with the writer Hunter S. Thompson. His style of illustration is very satirical, with caricatures of politics and society. Steadman won the Francis Williams Book Illustration Award for his illustrations for 'Alice in Wonderland'.