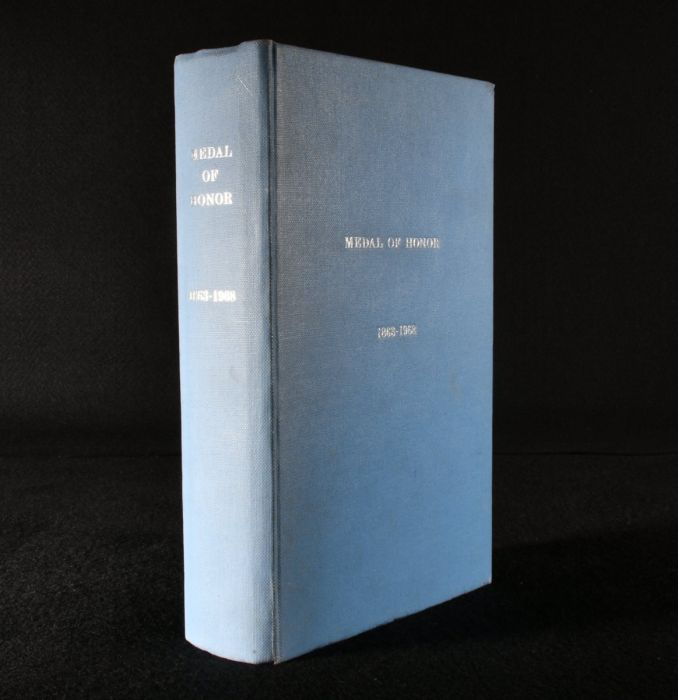 The first edition of this uncommon, official work reporting on the receiving of the Medal of Honor, the US Government's highest and most prestigious military decoration. With various historical notes on different battles from 1863 to 1968 as well as a documentary background on the Medal of Honor, and a report of the recipients.

Loosely inserted, among other newspaper articles regarding the Medal of Honor, a newspaper column by Dr. Robert Oresko, arguing about the value of the Order of the British Empire compared to the Congressional Medal of Honor, dated 19.7.04. In response, a Robbie Robins wrote a letter to the doctor:

I was delighted to read your letter about the Medal of Honor in today's "Times."
It was not only misleading, but also unpardonable, to equate the Order of the British Empire with the Congressional Medal of Honor, a supreme military award.
To assure you that some people are aware of its valor I am enclosing a tribute to one of the exclusive "Band of Brothers."
Your sincerely,
Robbie Robins.

Rebound in cloth with titles in silver to front board and spine. Original publisher's paper wraps bound in. Externally excellent with only minor shelfwear. Loosely inserted, various newspaper articles on the medals of honour, as well as a written discussion between Robert Oresko and Robbie Robins. Cloth to spine is very slightly faded. Internally, firmly bound. Pages are bright and clean.