The store will not work correctly in the case when cookies are disabled.
By Collective
Tokyo   The Asahi Shimbun Publishing Company
13" by 10"
A scarce complete set in eighteen colourful volumes of this immensely popular and important Japanese newspaper, the large edition in English titled This is Japan. The first editions.
By Collective

Tokyo   The Asahi Shimbun Publishing Company
13" by 10"
A scarce complete set in eighteen colourful volumes of this immensely popular and important Japanese newspaper, the large edition in English titled This is Japan. The first editions.
£1,950.00
: 30kgs / : 771A73
Add to Wish List 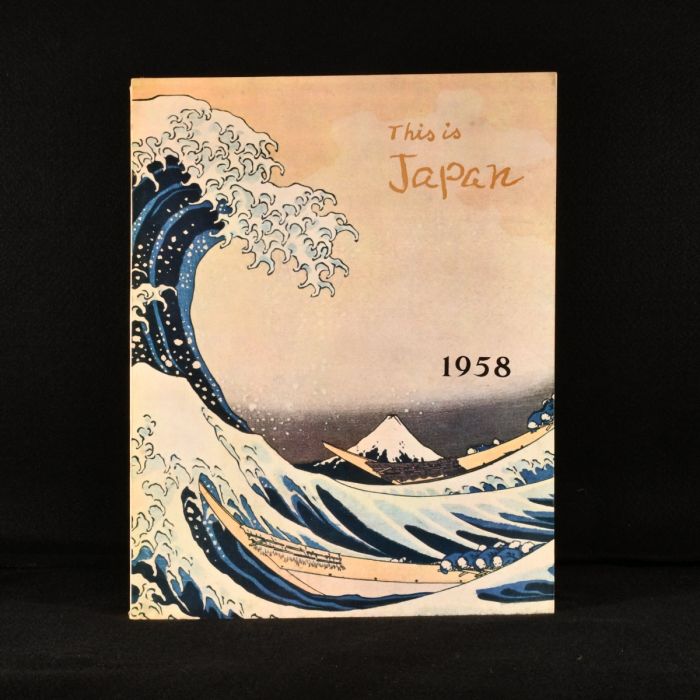 Asahi Shimbun is one of the four largest newspapers in Japan, as well as one of the oldest in Japan and Asia, founded in 1879 by the Murayama and Ueno families. It is known for its liberal and progressive news.

In the early twenty-first century, its daily circulation was one of the largest among the newspapers in the world with over six million subscribers, after the Yomiuri Shimbun.

After the war, Asahi Shimbun issued a glossy and large-format annual in English titled This is Japan, published between 1954 and 1971.

This is the complete and scarce set in eighteen volumes. The first editions.

All in the original publisher's wraps, illustrated with iconic and stunning Japanese art pieces. Volumes twelve to eighteen come with the original slipcases. Volume fourteen comes with its original cardboard box in addition to its slipcase, and volume nine is in an attractive wooden box.

Richly illustrated with numerous colour and monochrome advertisements and illustrations.

The set comes with a classified index pamphlet for the first ten volumes.

Number One, edited by Torao Seito, 1954. With Richard Hughes, Sofu Teshigahara, Yoshinori Sasamura, and many others. In Japan's first year of post-war sovereignty, this issue reviews "The Vanishing Occupation" Japanese civil aviation again finds its wings, and "East and West Meet on the Tokyo Stage," as in "Odori and Revue."

Number Two, edited by Torao Saito, 1955. Contributed by Lindesay Parrott, Norihisa Okuda, Yoshio Fujioka, and others. After the first post-war decade, "Is Japan Turning Back the Clock?" There is alarm at the Bikini H-bomb test but self-defence capability is "inevitable." Temples and ceramics are explored.

Number Three, edited by Torao Saito, 1956. With Yoshitada Kumamoto, Edmund Blunden, Ichitaro Kondo, Peter Robinson, and others. The beauty and rich history of the Seto Inland Sea are described, from the Naruto Whirlpool to the White Heron Castle. So are "Three Centuries of Wood-block Printing," and "The Story of Ukiyo-e."

Number Six, edited by Torao Saito, 1959. With authors such as Vera Hirschberg, Robert Guillan, Shigero Yoshida, et al. A special report on the "Gardens of Japan." Jomon pottery inspired "The Dawn of Japanese Art." Ukiyo-e returns with "Bijin-ga: Pictures of Beautiful Women." A tour is made of Japan's inland waterways.

Number Seven, edited by Torao Saito, 1960. With contributions by Rowland Gould, Koichi Aki, Masanobu Tsuji, and Georges Houot. "The Tiny World of Tea" is described in a series of articles and famous tearooms are photographed. The whole story of the classical dance is told. Mount Fuji is viewed from every angle.

Number Nine, edited by Torao Saito, 1962. With contributions by writers such as Noboru Kawazoe, Richard Hughes, Torashi Imamura, et al. "Art defies the Elements," in granite and rock statuary beside highways and by-ways. "Treasure  Houses Preserve the Wealth of Centuries." Folk-toys recall the lore and customs of Japan. This issue comes with an original wooden slipcase.

Number Ten, edited by Torao Seito, 1963. Written by authors such as Noshiji Nishijima, H. I. Williams, Shigeru Yoshida, Antoin Raymond. The tenth anniversary Special Issue. The Meiji Ear Transformation of Japan is recalled in every detail, from "The Gas-light Era Dims the Oil-Lantern," and "The Coming of the Departo" to " When Meiji Changed all the Clocks." With many old prints.

Number Eleven, edited by Torao Saito, 1964. With writers such as Shintaro Ryu, Shintaro Ishihara, Rokusuke Ei, Michael Elliot, and many others. "A Guide to Unknown Tokyo" takes the reader on an informative tour of Ginza, Asakusa, Shibuya, Shinjuku, and Ikebukuro. The impact of the Tokyo Olympiad is noted, along with the "Zen, the Athlete's Secret Weapon."

Number Twelve, edited by Torao Saito, 1965. Kenichi Yoshida, William Stevenson, Richard Hughes, Shizuma Matsuo, et al. A special report explores the region centering on Osaka and including Kyoto, Nara, and Kobe. Famous authors write of their native places and customs, plus food in The Mood is Part of the Menu." Complete with a large illustrated map of Kyoto loosely inserted.

Number Fourteen, edited by Yuichiro Matsushima, 1967. With Masao Ohara, Hessell Tiltman, Nobutoshi Hagihara, Ralph Hewins, et al. Pitfalls in the Japanese language emerge in "Quest of Exotic Characters" and "The Japanese Way of Writing English. A special report covers Ura-Nihon, "the back of Japan on the Japan Sea coast.

Number Fifteen, edited by Yuichiro Matsushima, 1968. Written by authors such as Katsuo Tsushima, Lin Yutang, Ralph Hewins, Gyosai Tamura, and others. The role of fish in the Japanese economy, menu, and culture earns a special report, "Fishes of the River, Fishes of the Sea;" So do the "Four Countries of Shikoku Island" visited by four foreign authors.

Number Seventeen, edited by Tatsuo Mamiya, 1970. With authors such as E. Seidensticker, K. Morimura, D. Britton, S. Miyao. The Nobel-Prize-winning author Yasunari Kawabata contributes a short story and writes of his life and work. "Lairs of the Forgotten Pirates" explores Islands of the Inland Sea.

Number Eighteen edited by Tatsuo Mamiya, 1971. Some of the principal writer include Yukio Mishima, John Bester, Sawaka Ariyoshi, and others. The last issue in the series, it winds up the editing and reading adventure that This is Japan has represented for its publishing staff in Tokyo and subscribers around the world. With an interesting essay being a nostalgic backward look at the newspaper's role in post war Japan by Richard Hughes.

In the original publisher's illustrated wraps. Externally lovely with only minor shelf wear; the covers are lightly rubbed to head and foot, particularly to the first few volumes. With a slight sunning to the spine of volumes six and seven. Volumes twelve to eighteen come in the original publisher's cloth slipcase, and number nine is in the original wooden slipcase. All slipcases are excellent with only minor shelf wear and the occasional minor faint odd spotting. Volume fourteen comes with its original cardboard box in addition to its slipcase. Internally, firmly bound. The pages are bright and clean. Richly illustrated with numerous colour and monochrome advertisements and illustrations. With a large illustrated map of Kyoto inserted to volume twelve. With a master index of all volumes inserted to volume one. This set comes with a classified index pamphlet for the first ten volumes.