The store will not work correctly in the case when cookies are disabled.
By Isaac Asimov
New York   Doubleday & Company
8" by 5.5" [8], 9-223pp
A beautiful true first edition of Isaac Asmiov's first published novel. An imaginative sci-fi novel that's set some fifty-thousand or so years in our future.
By Isaac Asimov 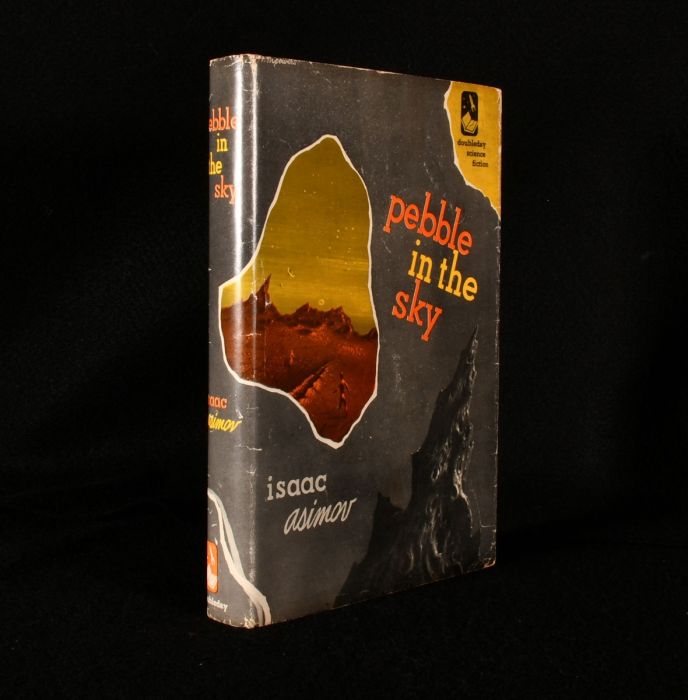 In the original unclipped dustwrapper.

'Pebble in the Sky' was Asimov's first published novel, which was originally written during the Summer of 1947 under the title of 'Grow Old With me', intended to be published in 'Startling Stories'. Asimov had been invited to contribute a story by Sam Merwin Junior, however the story was later rejected, as the magazine was supposed to have a heavier emphasis on adventure, rather than science-fiction. In 1949, Walter I. Bradbury from Doubleday accepted the story upon the suggestion of Frederick Pohl. In order for the work to be published, Asimov had to expand it from forty-thousand words to seventy-thousand.

In 'Pebble in the Sky' Joseph Schwartz, an ordinary retired man, is suddenly transported tens of thousands of years into the future, after an accident as a nearby nuclear laboratory. Stuck on this planet, Schwartz if taken in by a farm couple who take him to be mentally deficient. The couple offer Schwartz up for an experimental procedure that's intended to increase his mental abilities. The experiment works, and Schwartz is able to quickly learn the new language, and also somehow now has strong telepathic abilities.

This novel is part of Asimov's 'Foundation' series, and in fact was the basis for the later 'Foundation' novels, which are set in the same universe, though take place about ten-thousand years later. The novel is also in his 'Galactic Empire' trilogy, with this volume being set in the early Galactic Empire, when the galaxy is unified.

In the original publisher's cloth binding, in the original unclipped dustwrapper. Externally, generally smart. Light marks to the boards and spine, being residue from formerly adhered tape. Minor bumping to the head and tail of the spine and to the extremities. Light tape mark to the endpapers. Dustwrapper with light edgewear, and a few light marks. Internally, firmly bound. Pages are lightly age-toned and clean, with just a couple of odd light spots.