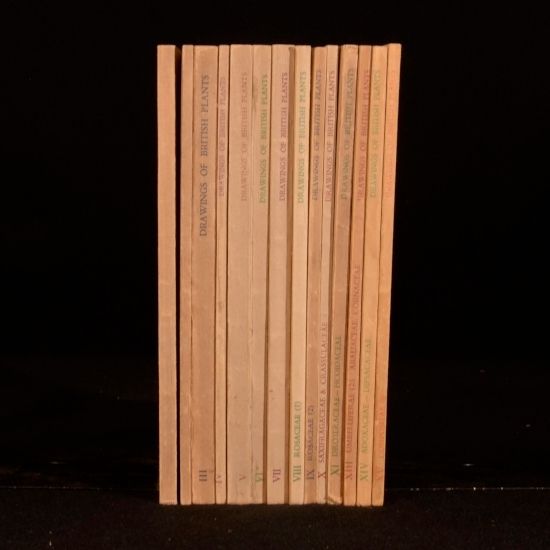 Volumes include; Part I: Ranunculaeceae, Part II: Berberidaceae etc, Part III:Cruciferae, Part IV: Resedaceae etc, Part V: Caryophyllaceae, Part VI: Portulacacea etc, Part VII: Leguminosae, Part VIII: Rosaceae (1), Part IX: Rosaceae (2), Part X: Saxifragaceae etc, Part XI: Droseraceae etc, Part XIII: Umbelliferae (2), Part XIV: Adoxaceae, Part XV, Compositae (i). Stella Ross-Craig was an English illustrator best known as a prolific illustrator of native flora. Interested in botany from her youth, she studied at the Thanet Art School before beginning work as a botanical illustrator at Kew Gardens. Her work drew the attention of Sir Edward Salisbury, the director of Kew, who brought her to a publisher. The first in Ross-Craig's Drawings of British Plants was published in 1948. The series was issued as a set of inexpensive paperbacks, a departure from similar books for professionals or wealthy amateurs. The series eventually grew to 31 parts, taking until 1973 to complete and containing over 1300 lithographic plates. The series contained all the British flowering plants except for the grasses and sedges. She often drew from preserved dried specimens kept at Royal Botanic Gardens, Kew, and she worked in black and white. With a foreword by Sir Edward Salisbury and two volumes signed by Stella Ross- Craig to the title page.

In paper wraps. Externally, generally smart with some light edgewear. Volumes sunned with some age toning and occasional spotting to wraps. Internally, all volumes firmly bound. Pages generally bright and clean. Parts IX and XV with booksellers labels to front pastedown. Part XV with ink signature to front free-endpaper. Parts I and II signed by author to title page.