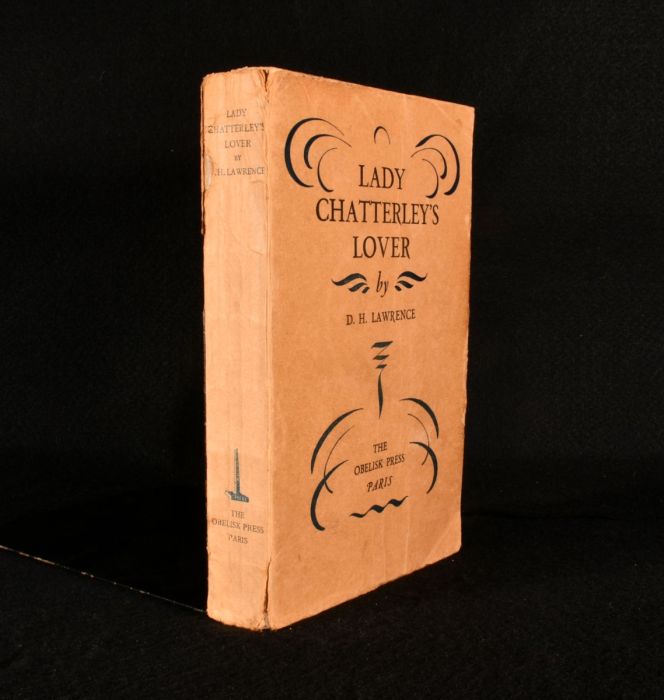 The eighth impression published by The Obelisk Press in Paris in 1936, an unexpurgated authorised copyright edition.

'Lady Chatterley's Lover' was a controversial novel when first published in a private edition in Italy in 1928 and France in 1929. An unexpurgated edition was not openly published in the U.K. until 1960, when it was the subject of an important obscenity trial against Penguin Books. The book had been banned due to its obscenity in being sexually explicitly, and for its use of the then-unprintable four-letter words. The romance in the novel was also notorious at the time as it took place between an upper-class woman and a working-class man.

Overall the novel is a love story for the upper-class woman Constance Reid, who is stuck in an unhappy marriage with a paralysed war hero. She begins an affair with the gamekeeper, and is an important commentary on class difference of the time.

This was an important novel of the twentieth century, ushering in the sexual revolution that happened post-World War Two into the 60s and 70s.

The Obselisk Press was founded by Jack Kahane in 1929, an English language press based in Paris. The Press is known for publishing controversial novels, such as 'Tropic of Cancer' by Henry Miller, 'The Well of Lonliness' by Radyclffe Hall, and 'Death of a Hero' by Richard Adlington.

In the original publisher's paper wraps. Externally, generally smart, wraps are a little age-toned. A couple of minor spots to the wraps. Light edgewear to the wraps, resulting in a small amount of loss to the spine. Small closed tear to the rear joint and to the tail of the front joint. Internally, firmly bound. Pages are bright and clean with a couple of scattered spots.