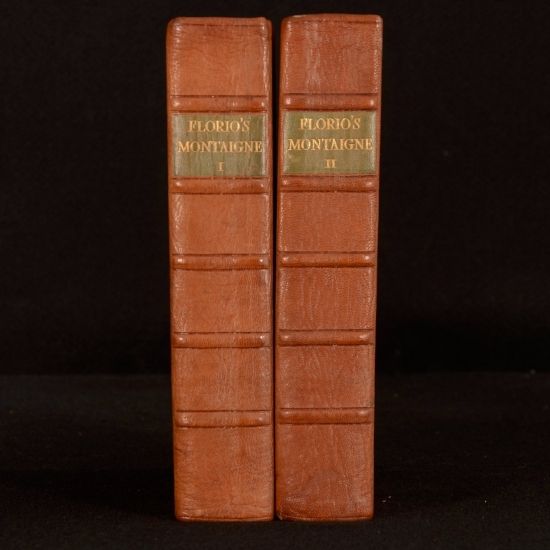 In the original bindings with 'Que Scay-Je' gilt stamped to the front boards. Limited edition, number 320 of 900 copies for sale. With a gift inscription dated 1949 to the recto of front endpaper. in two volumes. Lacking pages 201-206 to volume I. Otherwise complete. The John Florio translation of these essays. John Florio was a linguist and lexicographer as well as a friend and possible influence to William Shakespeare. He was the first to translate Montaigne's works into English. Michel de Montaigne was one of the most significant philosophers of the French rennaisance. He is known for popularizing the essay as a literary genre. His Essais contain some of the most influential essays ever written. Edited by J. I. M Stewart. The Nonesuch Press specialised in limited edition and private press. They were unusual among private presses as they used a small Albion press to design the books, but had them printed by commercial printers. In doing so, books with the quality of a fine-press were produced, but available to a wider audience at lower prices.

In full calf bindings with gilt stamping to the front of the boards and to spines. Externally, smart with minor rubbing to the head and tail of spines and to the extremities. Some spots to boards. Bookseller's label to the rear pastedown of volume I, Foyles London. Internally, firmly bound. Pages are slightly age toned with some spots to the first and last few pages. Final leaf and pages 195 -200 to volume I has been repaired with adhesive tape. Lacking pages 201-206 to volume I.