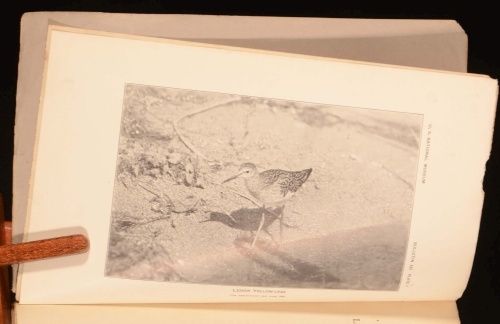 Parts 1 and 2 of the Shore Birds of North America, Order Limicolae set, part of a 21 volume work. First editions. With a frontispiece to each volume and many photographs of birds. Arthur Cleveland Bent (1866 – 1954) was an American ornithologist. He is notable for his encyclopedic 21-volume work, Life Histories of North American Birds, published 1919-1968 and completed posthumously. Bent was brought up in Massachusetts, where he became interested in birds as a child. He was later successful in business and travelled throughout North America, acquiring an extensive knowledge of its avifauna. From 1901 he was contributing papers to The Auk, the journal of the American Ornithologists' Union. Following a request from the Smithsonian Institution in 1910, Bent started work on the project that would dominate the rest of his life. Using his own experiences, the published literature, and contributions from hundreds of others, he put together what was at the time by far the most comprehensive repository of knowledge about the biology of the birds of North America. His accounts were published progressively in the United States National Museum Bulletin (NMB), and later republished by Dover. In 1940 Bent was awarded the John Burroughs Medal for distinguished book-length nature writing. He was awarded the Daniel Giraud Elliot Medal from the National Academy of Sciences in 1949.

In original paper wraps. Externally, sound with slight chipping, curling and the odd mark to boards. Closed tears and slight loss to one backstrip. Internally, generally firmly bound. Bright with the odd mark and many unopened pages.