1928 A Fairy Garland Being Fairy Tales From the Old French 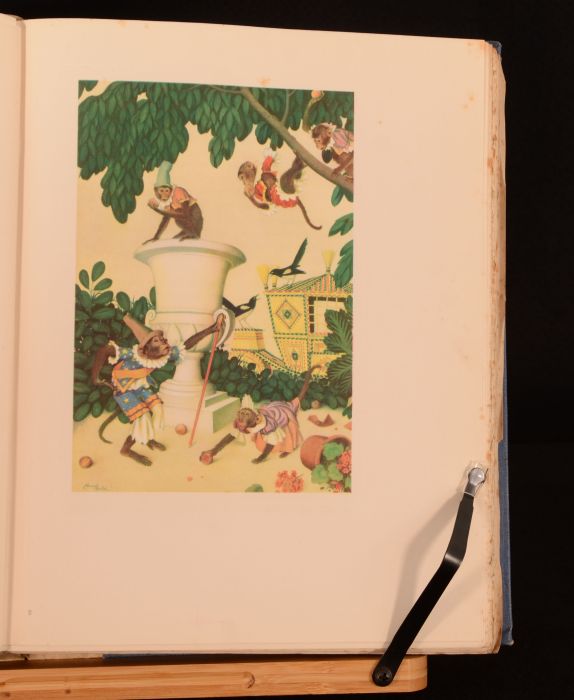 A signed limited edition, being numbered five-hundred and eighty of one-thousand copies. Signed by the illustrator to the edition page. Illustrated with twelve colour plates. Collated, complete. A collection of classics children's French fairy tales, including 'Puss in Boots', 'Princess Rosette', 'Green Dragon', 'The Fairy Song', and more. These stories show the beginning of the trend for fairy tales, which have reminded at the forefront of literature since the seventeenth century. The stories were written by Charles Perrault, Madame d'Aulnoy, and Count Anthony Hamilton. Perrault is known to have laid the foundation for the literary genre of fairy tales, with his publication 'Histoires ou Contes de Temps Passe', of which the best known, 'Puss in Boots', is included in this volume. d'Aulnoy is known for coining the phrase 'fairy-tales', and she names her works 'Contes de Fees'. Hamilton was a soldier as well as a writer, and was exiled from France for siding with James II against the Prince of Orange. Illustrated by Edmund Dulac, a well known book illustrator of natural sciences. His first commision was to illustrated editions of the Bronte novels. He also illustrated many fairy tales, such as 'The Sleeping Beauty', and a collection of stories by Hans Christian Andersen. A colourful collection of old French fairy tales, illustrated throughout.

In the original publisher's quarter vellum binding with cloth to the boards. Externally, smart. Light discolouration and marks to the vellum, as is usual. A few light marks to the boards. Minor bumping to the extremities. The odd spot to the fore edge. Internally, firmly bound. Pages are bright and generally clean with the odd scattered spot.