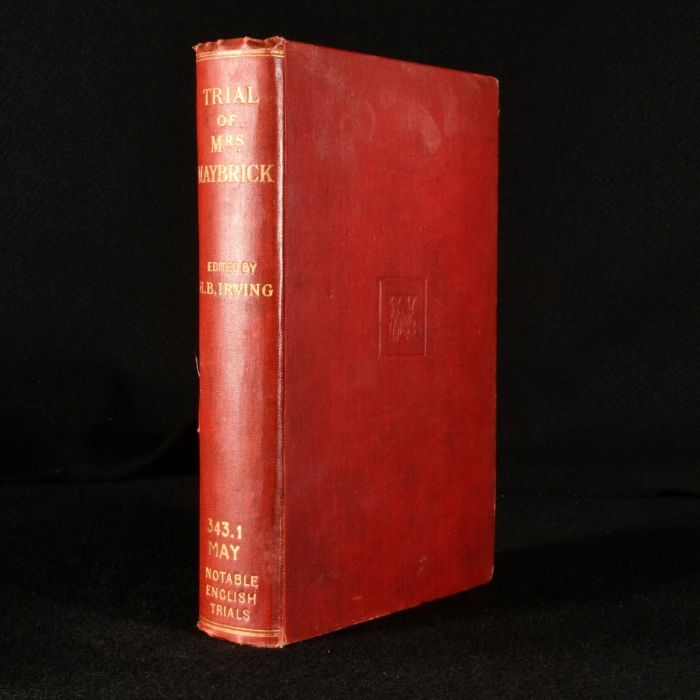 In the publisher's original cloth binding. With a library shelf number gilt stamped to the spine.

Illustrated, with a frontispiece and five plates.

This is a full account of the trial of Mrs Maybrick who was convicted of murdering her cotton merchant husband James Maybrick through poison. Preceding the day-by-day account there is a list of dates and the counsel. There were five trial days in total, and each day has a verbatim account of proceedings.

This trial was sensational and gripped the attention of the general public at the time and was reported by press in England and America.

More than a century after his death Maybrick was accused of being Jack the Ripper following the revelation of a diary whereby he confessed. Subsequently this was found to be a hoax. However, researcher Bruce Robinson believes that his brother Michael Maybrick was the true killer.

An ex-library copy, with library plates for Hammersmith Public libraries to the front pastedown and library stamps to the verso of title page.

Inscription to the recto of front endpaper, regarding this case and is a direct quotation from Sir William Nott Brown's book '52 Years a Policeman'. The long inscription explains that new evidence came to light after the trial whereby a Liverpool chemist came forward and said that Mrs Maybrick drove to his shop in Spring 1889 and asked for powdered arsenic and he supplied her with a quantity. She then went back two weeks later to ask for more and he supplied her again.

An uncommon work on what was a captivating trial at the time.

In the publisher's original cloth binding. Externally, generally smart. Rubbing to the head and tail of spine and a small loss to cloth at the extremities. A few handling marks to the bront board. Library labels to the front pastedown. Neat inscription to the recto of front endpaper, continuing to the verso. Library stamp to the verso of title page. Internally, binding is strained in places. Pages are bright. Occasional light spots to pages.