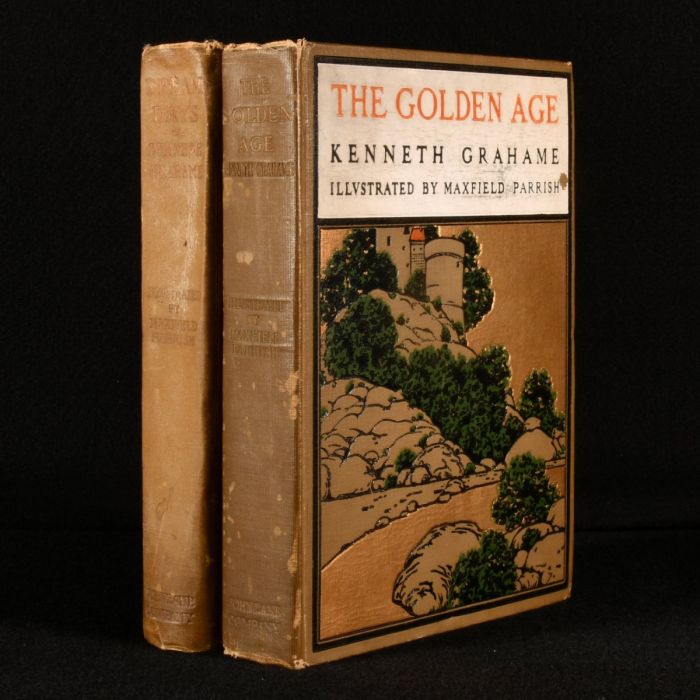 'The Golden Age' was Grahame's first collection of stories, which he had previously been publishing in London periodicals. First published in 1895, it is considered a classic of its genre. It takes its foundation as the culture and myth of Ancient Greece, which Grahame using characters from mythology throughout the work.

The original publication was not illustrated; it was reissued in 1899 with Maxfield Parrish's illustrations in black and white.
'Dream Days' is a collection of fiction for children which acts as a sequel to 'The Golden Age'; it contains 'The Reluctant Dragon', which was later adapted to film by Walt Disney Productions.

Kenneth Grahame (1859-1932) was a British writer, most widely known for 'The Wind in the Willows' and 'The Reluctant Dragon'.

Both volumes are illustrated by Maxfield Parrish (1870-1966), an American illustrator and painter who also illustrated works for Washington Irving and Frank L. Baum.

'Dream Days' is undated; dated from copies on Jisc.

In the publisher's original full cloth binding. Externally generally smart, boards are a touch discoloured and the spines are worn to the head and tail, with a few spots to the spine of 'The Golden Age'. Internally, generally firmly bound. Pages are bright and clean.