The store will not work correctly in the case when cookies are disabled.
By Edmund J Sullivan
London   George Bell and Sons
7.5" by 5" xxiii, [2], 3-351, [1]pp
An original unpublished manuscript poem by Laurence Houseman written to the half-title of Thomas Carlyle's 'Sartor Resartus'.
By Edmund J Sullivan 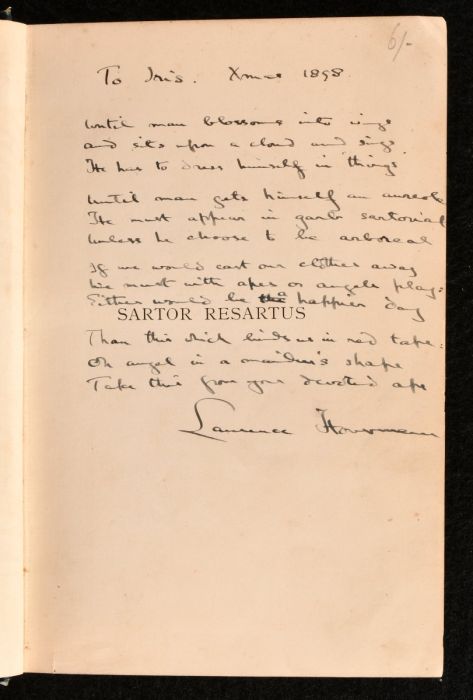 'To Iris, Xmas 1898
Until Man blossoms into wings
and sits upon a cloud and sings
He has to dress himself in 'things'
Until man gets himself an aureole
He must appear in garb sartorial
Unless he choose to be arboreal
If we would cast our clothes away
We must with apes or angels play:
Either world be a happier day
Than this which binds us in red tape:
oh angel in a maiden's shape
Take this from your dreaded ape.'

With Houseman's signature below the hand-written poem.

Laurence Housman was the younger brother of poet A.E. housman. He was first an illustrator, and is known for illustrating Christina Rossetti's 'Goblin Market' and Jane Balow's 'The End of Elfintown' in his Art Nouveau style. Following this he became a published poet. Politically, he wrote many pieces of socialist and pacifist pamphlets. At the time, people saw his views to be controversial and he founded the Men's League for Women's Suffrage with Henry Nevinson and Henry Brailsford in 1907. In addition to this Housman was openly homosexual and a founding member of the British society for the Study of Sex Psychology and was a member of the Order of Chaeronea.

A smart edition of Thomas Carlyle's novel which purports as a commentary on the early life and thought of German philosopher Diogenes Teufelsdrock. Upon initial publication Carlyle aimed for this to be a new kind of book that was both factual and fiction. The cantankerous narrator mocks the work's own structure. It is a parody of Hegel and German Idealism. Many critics see this work as an early existential text.

Housman's manuscript poem beautifully captures the themes of this novel.

In the original cloth binding. Externally, generally smart. Rubbing to the joints and extremities. Internally, firmly bound. Housman's inscription to the half-title page. Pages are bright and clean.