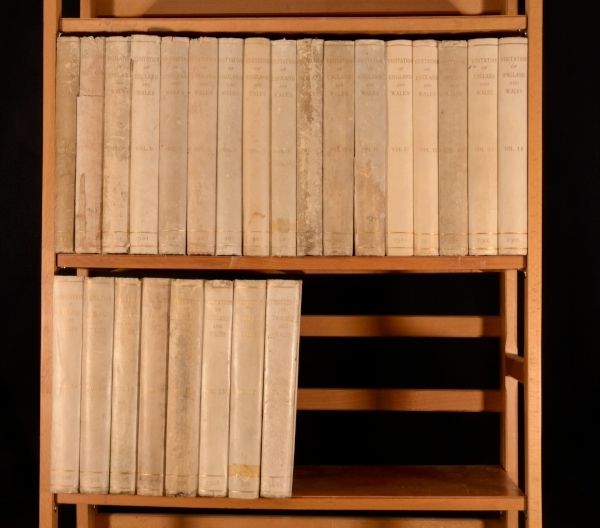 Each volume is limited to either one-hundred and fifty or five hundred copies, individually numbered and neatly signed by the editor. Containg a vast wealth of English and Welsh pedigrees and supporting documentation. The "Visitations" series records the genealogical information contained in the Herald's Visitations of the 16th and 17th centuries. The pedigrees start with the grandparents of the principal person, and contain notices of all descendants of their name, covering five generations in most cases. A significant amount of genealogical and biographical information is given for each person. These volumes mainly consist of pedigrees, but there are also some wills, land records, extracts from parish registers, copies of monumental brasses, etc. This collection consists of twenty-five volumes, being; Volume four, dated 1902. Volume five, dated 1897. Volume eight, dated 1900. Volume nine, dated 1901. Six copies of volume eleven, dated 1903, each individually numbered being numbers 162, 173, 201, 215, 335, and 346. Three copies of volume twelve, dated 1904, each individually numbered being numbers 45, 376, and 465. Volume thirteen, dated 1905. Seven copies of volume fourteen, dated 1906, each individually numbered being numbers 12, 45, 63, 145, 310, 364 and 466. Three copies of volume fifteen, dated 1908, each individually numbered being numbers 45, 116, and 215. Volume sixteen, dated 1909. In addition, the volumes contain illustrations of arms on record at the College of Arms, facsimiles of signatures, seals, book-plates, portraits, etc. With red and black titling to each volume. Featuring the original private circular order form, dated 1904. Loosely inserted into volume sixteen. The collection was originally started by Joseph Jackson Howard, although he died after volume nine was published. The work was therefore continued by antiquarian and publisher; Frederick Arthur Crisp. Joseph Jackson Howard was an English genealogist. The only son of Peter Howard of Clifton Cottage, Portland Place, Leamington, he was educated at Trinity Hall, Cambridge. A pioneer of the Civil Service Cooperative Stores, which became the Civil Service Supply Association Limited, of which he was Chairman, he became Maltravers Herald Extraordinary in 1887. Having been elected Fellow of the Society of Antiquaries in 1854, he originated and was editor of Miscellanea Genealogica et Heraldica from 1866, was a founder of the Harleian Society, and joint-founder and editor of The Visitation of England and Wales, 1893, and The Visitation of Ireland, 1897. An early collector of bookplates, he purchased in 1859 the collection of Miss Maria Jenkins, and published examples of the bookplates of baronets in 1895. Twenty-five volumes (several of which are duplicates) of the original thirty-three. Twenty-one volumes of "Visitations" were originally published together with fourteen

Each volume is in its original half vellum binding with cloth covered boards, and gilt lettering to the spine. Externally, volumes are intermittently rubbed, with the backstrip worn and lifting to volumes five, eight, nine, and eleven. Marks to the boards of volume four, and light damp staining to the front board of volume fourteen, and sixteen, as well as both boards of volume fifteen. Ink numbering to the spines of volumes five and twelve. Rear hinge to volume eleven is tender, with the front hinge being tender to volume twelve. Internally, each volume is firmly bound and bright. Intermittently clean, with light scattered spotting- which is slightly heavier to the endpapers of volumes five, twelve, fourteen and fifteen. Library bookplate and ink stamp to the title page of volume five, eleven, twelve, fourteen, and fifteen, as well as an armorial bookplate to the front pastedowns of volumes four, eight, nine, and eleven. Bookseller's label to the rear pastedowns of six volumes.