The store will not work correctly in the case when cookies are disabled.
By Washington Irving
London   Macmillan and co.
7.5" by 5" xiv, 284pp
A lovely illustrated edition of Irving's novel, illustrated by Caldecott in a straight grain morocco Bumpus binding with binder's stamp to front pastedown. With an engraved illustration to frontispiece and illustrated title page and numerous further illus
By Washington Irving

London   Macmillan and co.
7.5" by 5" xiv, 284pp
A lovely illustrated edition of Irving's novel, illustrated by Caldecott in a straight grain morocco Bumpus binding with binder's stamp to front pastedown. With an engraved illustration to frontispiece and illustrated title page and numerous further illus
£99.99
: 0.75kgs / : LTH14-F-9
Add to Wish List 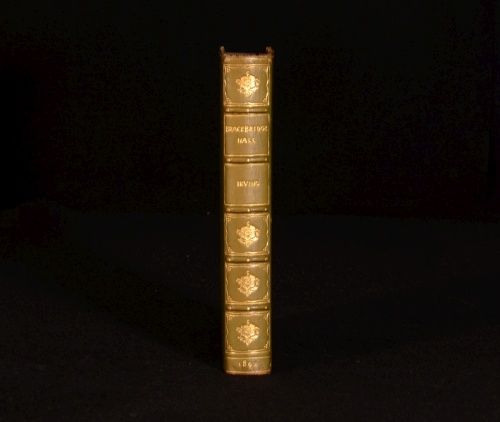 A reprint of the 1887 third edition. Bracebridge Hall, or The Humorists, A Medley was written by Washington Irving in 1821, while he lived in England, and published in 1822. This episodic novel was originally published under his pseudonym Geoffrey Crayon. As this is a location-based series of character sketches, there are a number of individual plots. The tales centre on the occupants of an English manor (based on Aston Hall, near Birmingham, England, which was occupied by members of the Bracebridge family and which Irving visited). Washington Irving (April 3, 1783 - November 28, 1859) was an American author, essayist, biographer and historian of the early 19th century. He is best known for his short stories The Legend of Sleepy Hollow and Rip Van Winkle, both of which appear in his book The Sketch Book of Geoffrey Crayon, Gent. He made his literary debut in 1802 with a series of observational letters to the Morning Chronicle, written under the pseudonym Jonathan Oldstyle. After moving to England for the family business in 1815, he achieved international fame with the publication of The Sketch Book of Geoffrey Crayon, Gent. in 1819. He continued to publish regularly - and almost always successfully - throughout his life. Irving, along with James Fenimore Cooper, was among the first American writers to earn acclaim in Europe, and Irving encouraged American authors such as Nathaniel Hawthorne, Herman Melville, Henry Wadsworth Longfellow, and Edgar Allan Poe. Irving was also admired by some European writers, including Sir Walter Scott, Lord Byron, Thomas Campbell, Francis Jeffrey, and Charles Dickens. As America's first genuine internationally best-selling author, Irving advocated for writing as a legitimate profession, and argued for stronger laws to protect American writers from copyright infringement.

In a fine straight-grain morocco binding. Externally, generally smart but with minor wear to extremities. Front hinge strained, rear hinge slightly strained. Internally, firmly bound. Bright with only the odd spot. With an ink stamp to front blank that has been erased in ink, creating slight loss and an ink mark to subsequent page.