1888-1918 Virginibus Puerlisque, Memories and Portraits, Weir of Hermiston, In the South Seas, Valima Letters, The Art of Writing and New Poems 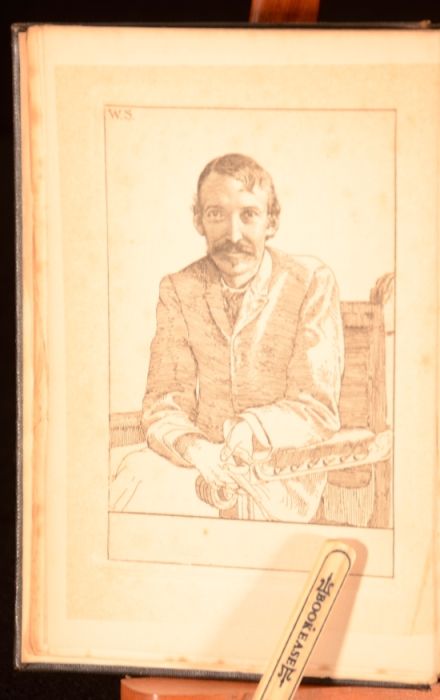 Stevenson's work, though enormously popular during the Nineteenth Century, fell out of favour in the years following the author's death, where the genres for which the author was largely known, particularly horror and adventure, became seen as unfashionable and trite. Early Twentieth Century Modernist writers such as Virginia Woolf and her husband Leonard condemned Stevenson and, with his reputation tarnished, he was to be unmentioned in The Norton Anthology of English Literature between 1968-2000, thus depriving generations of students of his work. He was however later to be re-evaluated and his work is now seen as a valuable addition to the British literary canon. In these seven volumes, we see Stevenson as both a storyteller and as an academic, breaching genres and form in his own unique style and cementing his reputation as one of Scotland's finest writers. The volumes contain various ink inscriptions and bookbinders' stamps, including two from Blackwell's bookshop, Oxford, as well as a bookplate.

In cloth binding with gilt detailing. Externally quite smart, there are some instances of wear to the extremities, joints and backstrip, as well as some sunning to backstrips and markings to boards. The hinges of Virginibus Puerisque. Internally, the pages are firmly bound and generally bright and clean throughout, aside from the odd instances of foxing, particularly to endpages and throughout The Valima Letters.