1886 - 1943 Transactions of the Bristol and Gloucestershire Archaeological Society 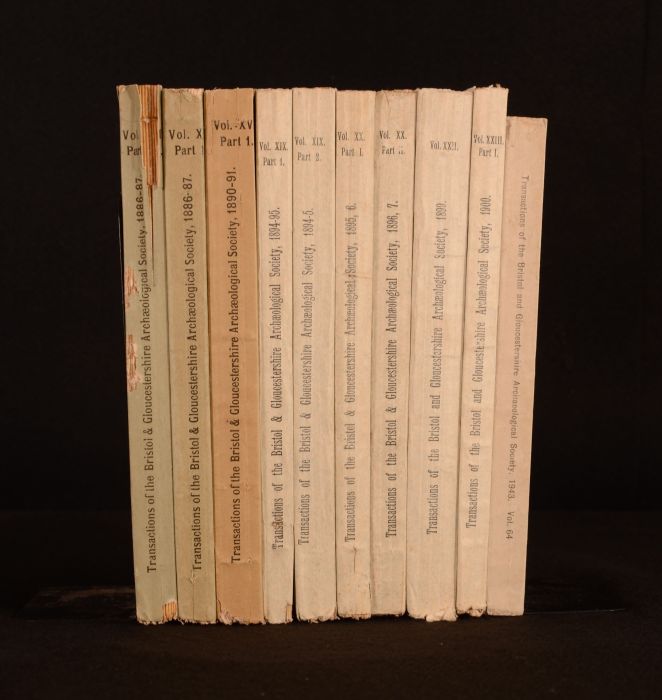 In the original publisher's paper wrappers. Externally, bumping has caused loss to the tail of the spines of Vols XI Part II, XV Part I, and XIX Part I, and to the head of the spine of Vol XI Part I. Split to the head of the spine of Vol XI Part II, lifting lighting, with some loss to the rear joint. Bumping to the head and tail of the spines and to the extremities. Light edgewear to the extremities. Light fold to the rear wraps of Vols XX Part II, andl XV Part I. Small mark to the rear wrap of Vol XXIII Part I, and to the front wrap of Vol XXII. Light spotting to the wraps of Vol Sixty-Four, and a stamp to the fore edge of the front wrap. A touch of age-toning to the extremities of the wraps of the older volumes. Head of the front hinge of Vol XXII is lifting but remains secure. Vols XI (Part II), XX Part II, and XXIII Part I, are firmly bound, Vols XI (Part I), XIX Part II, XXII, and Sixty-Four are generally firmly bound, Vols XV Part I, XIX Part I, and XX Part I are strained in places. Pages are bright and clean, though Vol Sixty-Four has light spotting, mostly to the first and last few pages, and a mark to page 243. Pages to volumes XI (Parts I and II), XV Part I, XIX Parts I and II, XX Parts I and II, and vol XXII are uncut to the fore edge.