1875 Philips' Atlas of the Counties of England, Reduced From the Ordnance Survey 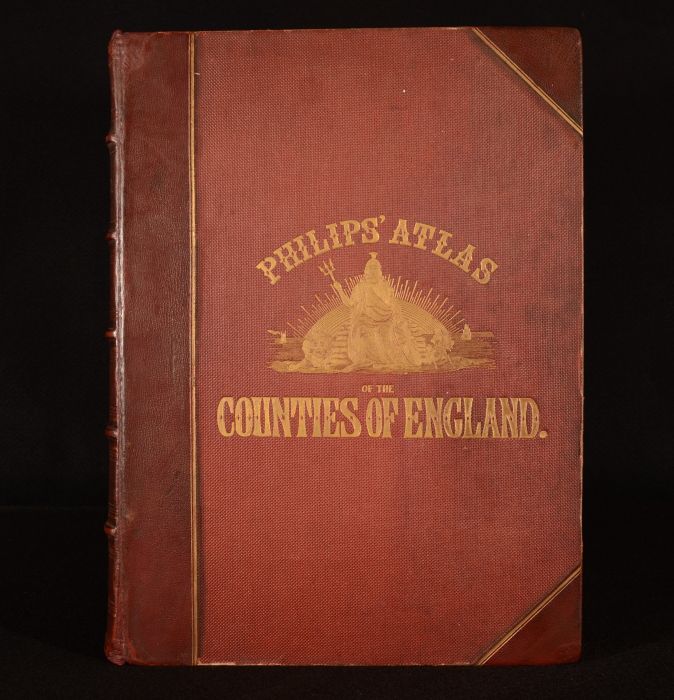 A new edition of this work. Collated, complete. A collection of forty-eight colour folding maps, showing in detail each county in England, as well as looking at Wales, the Isle of Wight, and the Isle of Man. The plates are notably finely engraved, as the engraved, Edward Weller, was known for. Some of the counties are divided on to separate sheets, including Lancashire and Yorkshire, allowing for an even greater level of detail. Containing a map showing all of England and Wales with a portion of Southern Scotland, and maps showing Bedfordshire, Berkshire, Buckinghamshire, Cambridgeshire, Cheshire, Cornwall, Cumberland, Derbyshire, Devonshire, Dorsetshire, Durham, Essex, Gloucestershire, Hampshire, Herefordshire, Hertfordshire, Huntingdonshire, Kent, Northern Lancashire, Southern Lancashire, Leicestershire and Rutlandshire, Lincolnshire, Middlesex, Monmouthshire, Norfolk, Northamptonshire, Northumberland, Nottinghamshire, Oxfordshire, Shropshire, Somersetshire, Staffordshire, Suffolk, Surrey, Sussex, Warwickshire, Westmorland, Wiltshire, Worcestershire, North West Yorkshire, North East Yorkshire, South West Yorkshire, South East Yorkshire, North Wales, South Wales, the Isle of Wight, and the Isle of Man, With a complete consulting index by John Bartholomew. Compiled by Edward Weller, a British engraver and cartographer. He is well known for being one of the first people of produce maps using lithograph. He worked from offices in Red Lion Square, and later in Bloomsbury. Weller also contributed maps for Cassell's "Weekly Dispatch Atlas", which was published in monthly segments.

Rebacked in a half morocco binding with cloth to the boards. Externally, smart. Evidence of former loss to the spine. Some light marks to the boards, heavier to the rear board. Minor bumping to the extremities. Internally, firmly bound. Pages are bright and clean with the odd spot. Pencil annotation to the reverse of maps. Title page and contents page have been repaired with an additional leaf adhered to the reverse. Map for North East Yorkshire is almost detached.