The store will not work correctly in the case when cookies are disabled.
By Frances Anne Kemble
London   Longman, Green, Longman, Roberts, & Green
8" by 5" [9], 2-434, [3], 2-32pp
A pleasing and scarce first U.K. edition of Fanny Kemble's important abolitionist work, published during the fraught times of the American Civil War.
By Frances Anne Kemble 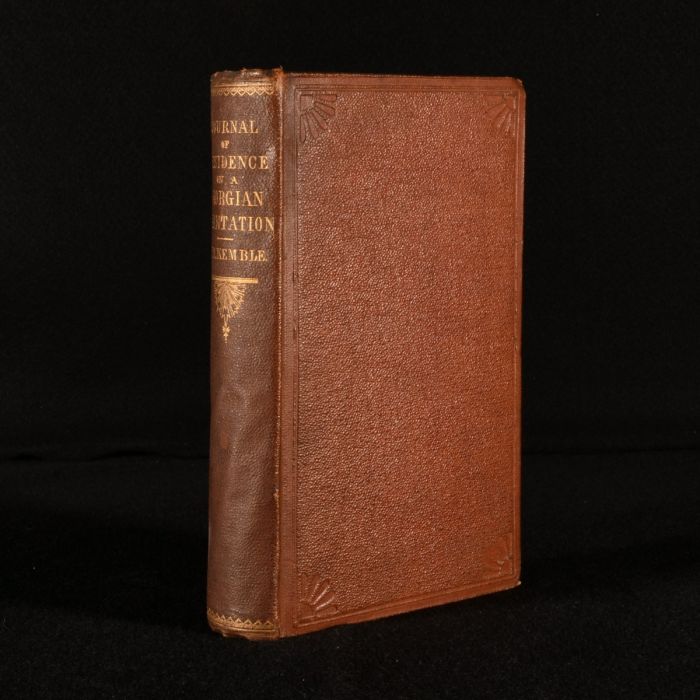 The scarce first U.K. edition of this work, in the original publisher's cloth binding.

Kemble circulated this memoir among American abolitionist circles before its publication, waiting until the American Civil War was in full force to publish it for the public.

This work contained Kemble's observations on slavery and the life of the slaves on her husband's Southern plantation, during a winter spent there from 1838 to 1839. Kemble moved to America after her marriage in 1834 to Pierce Mease Butler, who was an heir to cotton, tobacco, and rice plantations.

Kemble was a popular author of her time, as well as being a notable actress, having come from a theatre family, including having Sarah Siddons as her aunt. She first appeared on stage when she was twenty, playing Juliet in an adaption of 'Romeo and Juliet' at the Covent Garden Theatre. She carried on playing Shakespeare roles, as well as playing in Richard Sheridan's 'The School for Scandal'.

This memoir also contains the earliest known written use of the work 'vegetarian'.

Thirty-two pages of publisher's adverts to the rear.

In the original publisher's cloth binding. Externally, smart. A little bumping to the spine and extremities. Spine and extremities are a little discoloured. A little rubbing to the boards and spine. Hinges are starting but remain firm. Internally, firmly bound. Pages are lightly age-toned and clean with a few odd spots. Pages unopened to the top edge.