1862-3 The Works of Thomas de Quincey In Fifteen Volumes 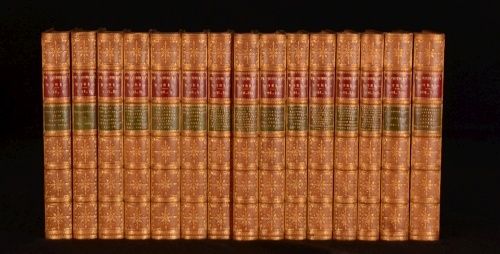 Second edition. Containing Confessions of an Opium-Eater, Recollections of the Lakes and Lake Poets Coleridge, Wordsworth and Southey, Last Days of Immanuel Kant and other writing, The English Mail Coach and other writings, Dr Samuel Parr or Whiggism in its Relations to Literature and other writings, Richard Bentley and other writings, Protestantism and Other Essays, Leaders in Literature with a Notice of Traditional Errors affecting Them, The Caesars and Other Papers, Style and Rhetoric and Other papers, Coleridge and Opium-Eating and other writings, Speculations Literary and Philosophic, The Art of Conversation and Other Papers, Autobiographic Sketches 1790-1803, and Biographies of Shakespeare, Pope, Goethe and Schiller and on the Political Parties of Modern England. Illustrated throughout with eleven plates (no collation available). Confessions of an English Opium-Eater (1821) is an autobiographical account about his laudanum (opium and alcohol) addiction and its effect on his life. The Confessions was "the first major work De Quincey published and the one which won him fame almost overnight..." The Confessions maintained a place of primacy in De Quincey's literary output, and his literary reputation, from its first publication; "it went through countless editions, with only occasional intervals of a few years, and was often translated. Since there was little systematic study of narcotics until long after his death, De Quincey's account assumed an authoritative status and actually dominated the scientific and public views of the effects of opium for several generations." Ex-libris bookplate of David M. Ritchie to front pastedowns. Complete in fifteen volumes.

In full calf bindings with gilt detailing. Externally smart, with just some light rubbing and a few marks to the boards. Internally, firmly bound. Pages are bright and mainly clean, aside from some light offsetting to the title pages. Burn mark to folding facsimile in volume I.