The store will not work correctly in the case when cookies are disabled.
By Richard F Burton
London   Longman, Green, Longman and Roberts
9" by 6" xvi, [2], 412; vi, [2], 468, 24pp
A finely bound copy of the first edition of this account of Richard Burton's tantalising nineteenth century explorations of the African Great Lakes. Charmingly illustrated, with chromoxylographs.
By Richard F Burton

1860 The Lake Regions of Central Africa A Picture of Exploration 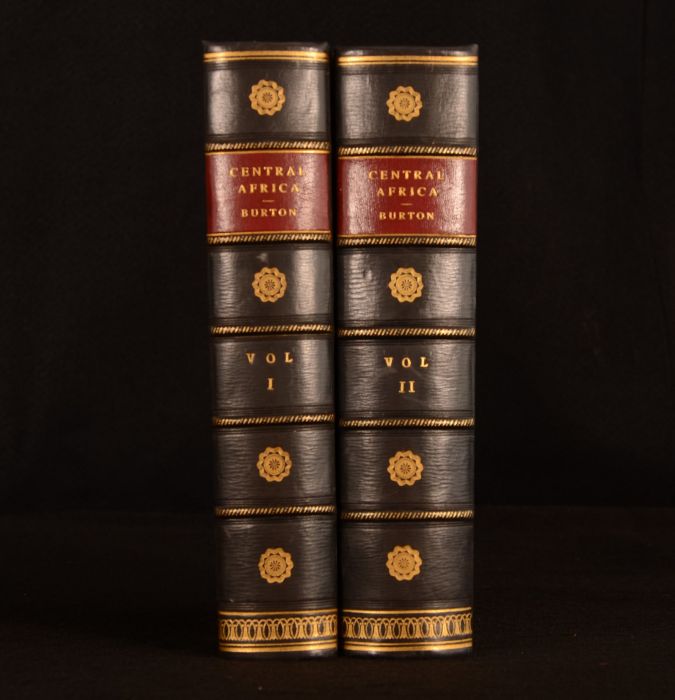 In a smart half morocco binding with marbled paper covered boards. Richard Burton was a British explorer who was well known for his travels in Asia, Africa, and America. He translated an edition of 'One Thousand and One Nights', and published 'Kama Sutra' in English. He was critical of the colonial policies of the British Empire, and was also a captain in the army of the East India Company. His life and adventures were frequently written about in the penny dreadfuls of the time. This work is considered to be one of Richard Burton's best books. It follows his Royal Geographical Society funded expedition to Zanzibar to explore the 'inland sea' previously described by Arab traders. He was accompanied by John Hanning Speke and started at the east coast of Africa, heading west in search of the lake or lakes which were believed to be the source of the Nile river. Burton explains in great detail the languages, customs and geography of the areas he travelled for what was his last great expedition. This account is a personal one, with Burton writing to the preface 'I have not attempted to avoid intruding matters of a private and personal nature upon the reader; it would have been impossible to avoid egotism in a purely egotistical narrative.' This expedition was lengthy and no mean feat. It is regarded to be Burton's hardest expedition. With half-titles. First edition, first impression with the 24 page publisher's adverts dated October 1858 as called for. Bolton Public Library and Museum blind stamp to most pages and all plates to the top right corner. Illustrated, with a chromoxylograph frontis, five further chromoxylographs, eight woodcuts, and the folding map (loosely inserted) to volume I. Volume II contains a chromo frontispiece, five more chromoxylographs and fourteen woodcuts to volume II. Collated, complete.

In uniform half calf bindings with marbled paper boards. Externally, very smart with just some minor shelfwear to the spines. Internally, generally firmly bound. Plate at page 155 to volume II is detached but present. Folding map plate is loosely inserted, does not appear to have been bound in. Small loss to this folding map to one corner. Pages are bright. Blind stamps for Bolton Public Library and Museum to the majority of leaves to the top outer corner. Plate to page 127 to volume I has some minor chipping to the edges in addition to the edges of plate to page 155 to volume II. Small tidemark to the top corner to the frontispiece to volume II and to the plate at page I to volume II. The occasional scattered spots to pages.