The store will not work correctly in the case when cookies are disabled.
By Richard Ford
London   John Murray
7" by 5" 10, 459, 72; iv, 461-995pp
A third edition of this two volume collection regarding travel in Spain written by Richard Ford.
By Richard Ford

1855 A Handbook for Travellers in Spain 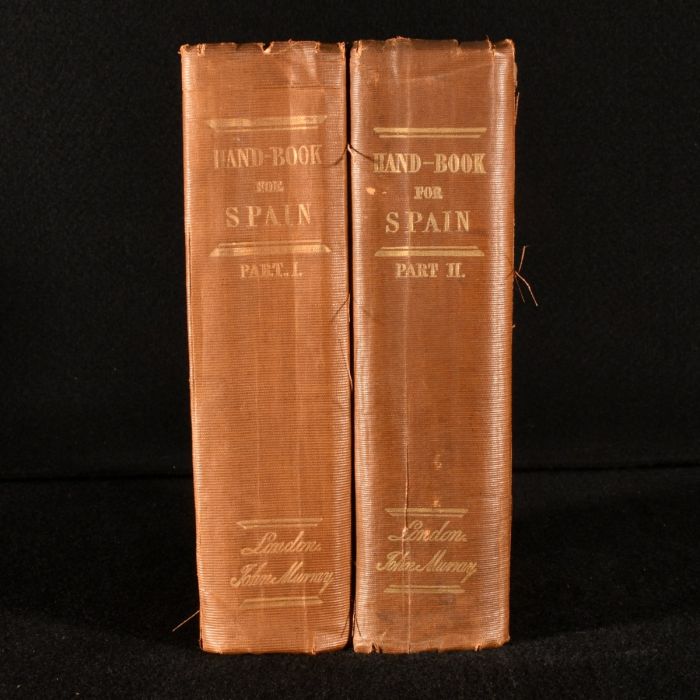 Written by Richard Ford (1796-1858), a travel writer remembered in particular for his works on Spain. He moved to Spain in 1830, and travelled the region extensively by horse. Upon his return to England, he published this work in 1845; it has been described as one of the masterpieces of travel literature. He also encountered Ludwig van Beethoven during his travels, as well as many other important and prominent figures of the time.

Highly regarded. This work was published when a demand for guidebooks was rising as British tourists began to visit Europe in larger and larger numbers year on year.

This copy a little thumbed - and might actually have been to Spain!

Containing a folding map to the rear of volume I, in a pocket as called for; this is a plate from a ninth edition Encyclopedia Britannica, later than this work, ergo lacking the original map.

There is also one folding map in the text of the first volume.

Bound with seventy two pages of publisher's advertisements to the rear of the first volume.

This is a third edition.

In the publisher's original full cloth binding. Externally rather worn; spines are cracked and the rear board of volume II is near loose and with some loss to the top. Internally, hinges to each volume are strained and exposed, with bindings fragile but remaining in place. Pages are bright and clean.