The store will not work correctly in the case when cookies are disabled.
By Charles Dickens
London   Bradbury and Evans
8.5" by 5.5" [7], viii-x, [1], xii-xiv, [1], xvi, [1], 2-624pp
The first edition early issue of Charles Dickens popular novel 'Bleak House', which surrounds Esther Summerson and the legal case Jarndyce and Jarndyce. Illustrated throughout by Phiz.
By Charles Dickens 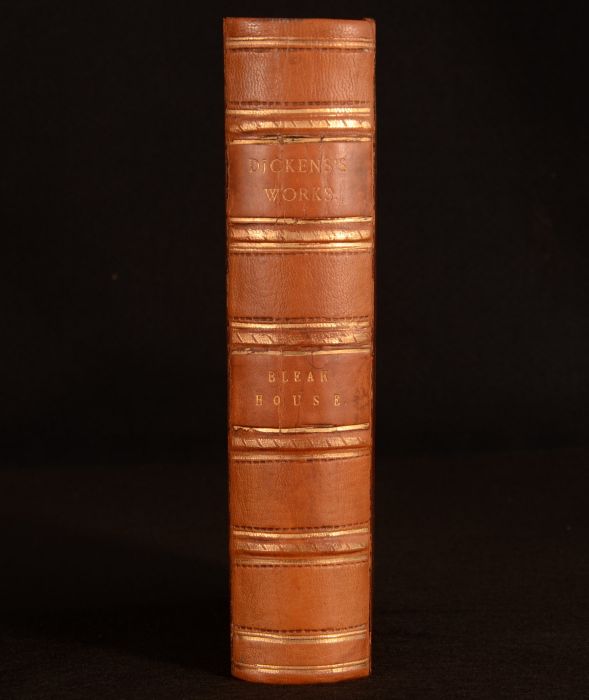 The first edition of this work, being the first edition in book form. An early issue, with the ten 'dark' plates. Other issue points for the first edition include ‘chair’ to page 209 line 23, 'counsinship' to page 275 line 22, and ‘picter’ to page 529 line 32. Illustrated with a frontispiece, vignette title page, and thirty-nine plates. Collated, complete. Bound without a half-title. With a five line errata to the end of the list of plates. This work is an octavo. A few plates have been misbound, with plate facing page 23 actually facing page 24, plate facing page 120 actually facing 121, plate facing page 177 actually facing 178, plate facing page 283 actually facing 284, and plate facing page 331 actually facing 330. ‘Bleak House’ is narrated by Esther Summerson, describing her house of Bleak House, where she goes to live under a new guardian, Mr Jarndyce. At the heart of the novel is a long running legal case, Jarndyce and Jarndyce, in the Court of Chancery. The case surrounds a number of several conflicting wills written by the same person. This case was probably inspired by the Thellusson vs Woodford case, a will which was read in 1797, and was contested and not determined until 1859. The novel actually held support a judicial reform, in the form of the 1870s Judicature Acts. Charles Dickens is possibly the most well-known Victorian author, with his fifteen novels still being widely read and performed, as well as being studied in school and enjoyed by people of all ages. ‘Bleak House’ was illustrated by Hablot Knight Browne, also known by his pen name ‘Phiz’. Browne was an English illustrator who illustrated ten of Charles Dickens' books, including 'David Copperfield', and 'Dombey and Son'.

Rebound with the original half calf boards lain on, with marbled paper to the boards. Externally, generally smart. Light bubing to the paper to the boards. Fading to the spine. Light mark to the spine. Joints are starting but firm. Internally, firmly bound. Pages are bright and generally clean with the odd spot, mostly to the first and last few pages and to the plates. Frontispiece has offset to the vignette title page.