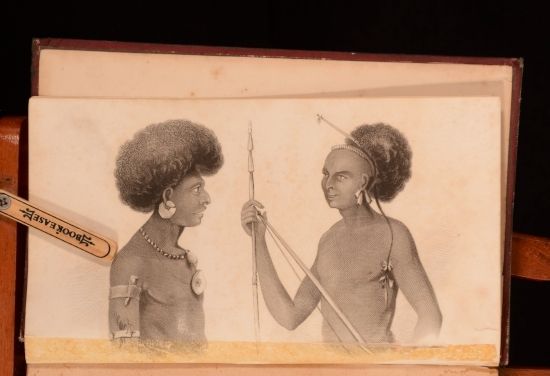 Very rare and even harder to findcomplete as here. Collated: Complete. With a frontispiece to each volume, eleven plates and sixteen vignettes collectively listed as 'plates' in the contents. One folding map of New Guinea. Errata to first volume. Includes an account of discoveries and surveys in New Guinea, The Louisiade Archipelago, etc. To which is added the account of Mr E B Kennedy's expedition for the exploration of the Cape York Peninsula. The HMS Rattlesnake was a 28-gun sixth-rate corvette of the Royal Navy launched in 1822. Best known for her historic voyage of discovery to the Cape York and Torres Strait areas of northern Australia. The Rattlesnake served in the Greek war of Independence and the first Opium war before being converted to a survey ship in 1845. Between 1846-1850 the Rattlesnake embarked on a voyage of discovery with Captain Owen Stanley with assistant surgeon Thomas Henry Huxley. John MacGillivray was botanist aboard the Rattlesnake for this journey. T H Huxley earned scientific renown for papers written on this voyage. During this voyage the Rattlesnake also rescued shipwrecked 13 year old Barbara Crawford Thompson who had survived five years living with indigenous people of Prince of Wales Island, remarkable as the tribe were believed to be cannibals. John MacGillivray was a Scottish naturalist active in Australia who accompanied various expeditions. Notably during the voyage of the Rattlesnake he was able to make records of the aboriginal languages of the various people he encountered.

In morocco bindings crudely rebacked with pebbled cloth. Cloth and glue remnants to all boards. Original backstrip preserved. Front board to volume II replaced with cloth board. Joints cracked to volume II, rear joint cracked to volume I. Hinges reattached with tape. Rear hinge to volume I strained with cords showing after endpaper. Rear board to volume II appears to be front board reattached upside down due remnant of bookplate to pastedown. Glue bleeding to front pastedown of volume I. Internally, generally firmly bound aside from to appendix of volume I, with pages 373-380 loose but present. Pages bright with scattered spotting throughout. Heavier patches of foxing to plates and title pages. Both title pages with Papua New Guinea Diocesan Library stamp. Volume II with small ink annotation to title page. Frontispiece to volume II with tape remnant and offsetting to frontispiece. Folding map tape repaired with close tears, spotting and loss to bottom right of map.