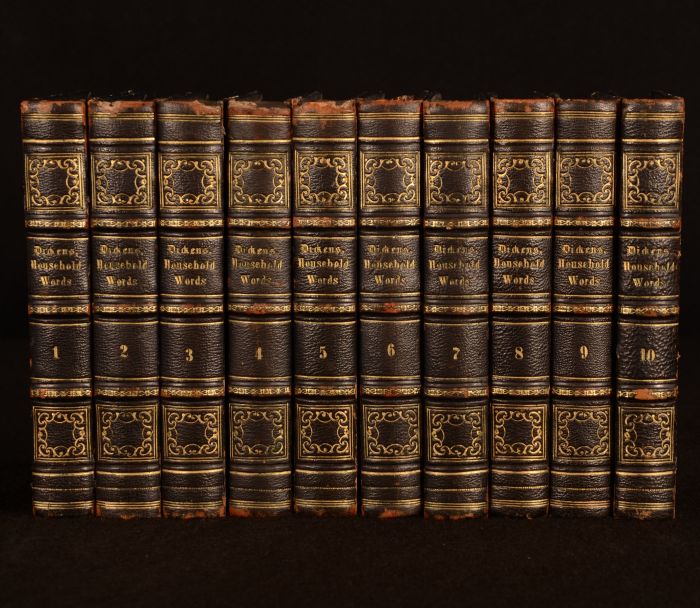 In ten volumes. The copyright edition. This work is an octavo. Collated, complete. Volumes CXCIX, CCVI, CCVIII, CCXI, CCXII, CCXIII, CCXVI, CCXVII, CCXX, and CCXXI of Tauchnitz's 'Collection of British Authors'. 'Household Words' was a weekly publication edited by Charles Dickens, which was in weekly circulation from 1850 to 1859. This publication was replaced by 'All the Year Round' in 1859. The publication contained a mix of short fiction and non-fiction, and searlised some popular works, including 'Cranford' and 'North and South' by Elizabeth Gaskell, and 'The Dead Secret by Wilkie Collins'. The non-fiction has a focus on social matters, and the paper in fact advertised itself as championing the causes of the working classes and the poor, though it actually addressed itself primarily to the middle class. Each issue cost only a tuppence, which provided and ensured a wide readership. The title is taken from a line in 'Henry V' by Shakespeare, 'Familiar in his mouth as household words'. Containing chapters one to ten of 'A Child's History of England' by Charles Dickens, as well as 'Lizzie Leigh' by Elizabeth Gaskell, 'The Water-Drops', 'The New Zealand Zauberflote', 'Two Aspects of Ireland', 'The Spendthrifts Daughter', 'The Story of Reineke the Fox', 'The Island in the River', 'Three May-Days in London', 'The Modern Soldier's Progress', 'Bits of Life in Munich', and more. Edited by Charles Dickens is possibly the most well-known Victorian author, with his fifteen novels still being widely read and performed, as well as being studied in school and enjoyed by people of all ages. He is generally regarded as being a literary genius, and his novels show a gritty side of Victorian society, for which he has been famed, with the term 'Dickensian' now being coined. Tauchnitz were an important part of Dickens' popularity in Europe. They received early texts of his new novels, and published them on the continent at the same time, or even earlier, than the UK editions. In totalk, they published thirty-six volumes of 'Household Words' from 1851 to approximately 1859. Bookplate to the front pastedown of Volumes I, III, IV, V, VII, VIII, IX, and X, 'Alfred Riess'.

In a quarter morocco binding with cloth to the boards. Externally, generally smart. Light loss to the head of the spines of Volumes I to V. Minor rubbing to the joints and raised bands. Light marks to the boards. Front hinge of Volume I is starting but firm. Bookplate to the front pastedown of Volumes I, III, IV, V, VII, VIII, IX, and X. Internally, firmly bound. Pages are bright and generally clean with light tidemarks to the text.