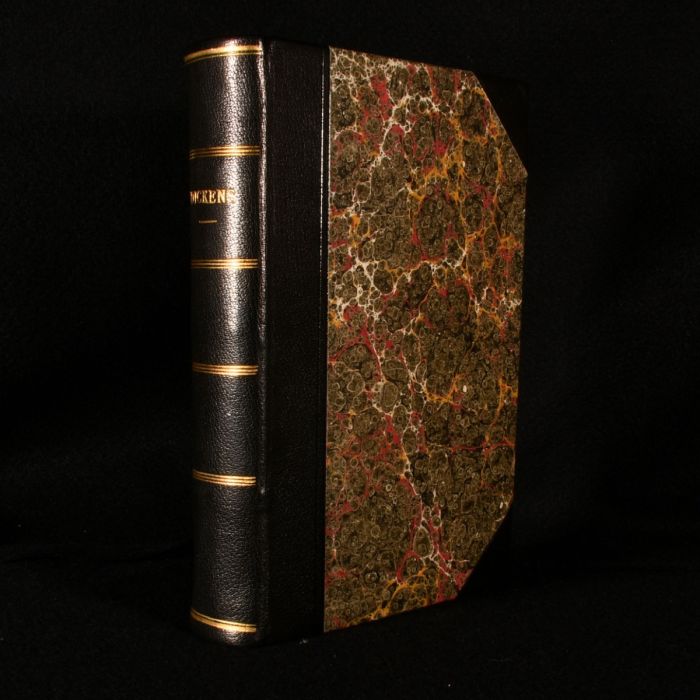 Early U.S. editions of these works.

'Dombey and Son', published by Getz, Buck, & Co in 1852. ‘Dombey and Son’ is about Paul Dombey, the owner of a shipping company, who intends to pass down ownership of his company to his son, ignoring his daughter, Florence. The novel tells the story of their family, and their hopes and fears. Illustrated with a frontispiece, vignette title page, and seven plates. Bound without thirty-one plates.

'Bleak House', published by Getz & Buck in 1853. ‘Bleak House’ is narrated by Esther Summerson, describing her house of Bleak House, where she goes to live under a new guardian, Mr Jarndyce. At the heart of the novel is a long running legal case, Jarndyce and Jarndyce, in the Court of Chancery. The case surrounds a number of several conflicting wills written by the same person. Illustrated by Hablot Knight Browne. Illustrated with a frontispiece, and seven plates.

Dickens is one of the most popular authors of the Victorian age. His novels show the grimy side of poverty and prosperity in Victorian England, showing poor social conditions alongside repulsive characters.

Hablot Knight Browne, most often known by his pen-name 'Phiz'. As Phiz, he illustrated many of Dickens' novels, including 'David Copperfield', 'Dombey and Son', and 'Bleak House', as well as illustrating for 'Punch' throughout his life.

In a half morocco binding with marbled paper to the boards. Externally, fine. Label to the front pastedown. Internally, firmly bound. Pages are lightly age-toned and clean with a few light spots. Plate 'Coming Home from Church' is torn to the fore edge.