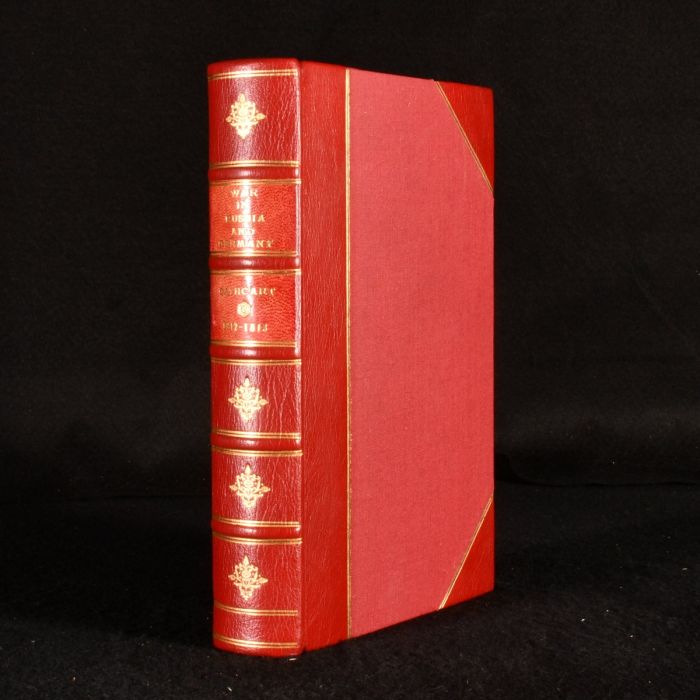 Illustrations include twenty-eight illustrated plates throughout the text.

bound in half-morocco on cloth boards.

This is a historical account of the military events of 1812, focusing particularly on the French invasion of Russia as well as the German campaign of 1813, also known as the 'Wars of Liberation'.

Contents include an introduction, which is titled 'A General Notice respecting the National Character and Systems of Discipline peculiar to the Several Nations engaged in the Grand Contest which forms the Subject of these Commentaries'.

Other headings include 'Origin of the War between Russia and France', 'The Invasion', 'Battle of Lutzen', 'The Armistice', and 'Retreat of Napoleon to Erfurt'.

Written by Colonel The Hon. George Cathcart (1794-1854), who was a British general and diplomate. Cathcart was an aide-to-camp to his father in Russia in the year 1813, and was present at the battles between the Russian and the French army. He was also aide-de-camp to the Duke of Wellington when Napoleon returned in 1815.

Sixteen pages of publisher's adverts to rear of text.

Bound in half-morocco on cloth boards. Externally, excellent, with no noticeable faults. Internally, firmly bound. Pages are lightly age-toned to the margins of pages with light spotting throughout the text. Ink inscriptions from prior owner to illustrated plate page, which gives descriptions on the various plates. Illustrated plates are bright and clean.