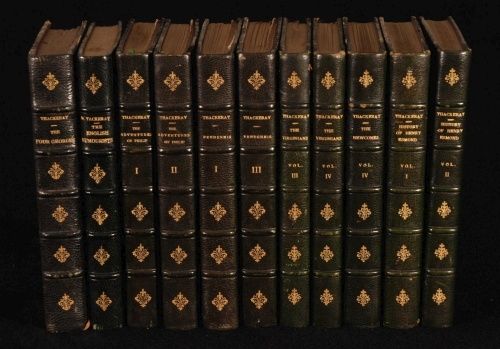 Eleven volumes library set, in a uniform binding. William Makepeace Thackeray (1811-1863), English novelist best known for writing satirical novels such as Vanity Fair. During the Victorian era he was second only to Dickens in popularity. The History of Henry Esmond tells the story of the eponymous hero, his participation in the unsuccessful campaign of the Old Pretender, and his eventual marriage to his cousin and foster-mother, Rachel, Lady Castlewood. They emigrate to Virginia and Thackeray's novel, The Virginians continues the story of the family but from the point of view of Henry's grandsons, George and Henry. The History of Pendennis concerns the romantic entanglements of Arthur Pendennis or Pen, his foster sister Laura and various other acquaintances. Pen is also the narrator of two later novels, The Newcomes and The Adventures of Philip. Please note that this collection of Thackeray's work contains the following: Henry Esmond (two volumes, complete), The Adventures of Philip (two volumes, complete), The Four Geroges (one volume, complete), The Humourists (one volume, complete), Pendennis (volumes one and three only), The Newcomes (volume four only), The Virginians (volumes three and four only). These volumes were previously owned by Ronald Lindsay, and contain his bookplate. Ronald Lindsay served as British Ambassador to the United States of America 1929-39.

In a calf binding. Externally, smart. There is some mild wear to the extremities including some rubbing, and some marks to the boards. There is a bookplate on the front pastedown of each volume. Internally, firmly bound. Pages are generally clean and bright with the odd brown spot or handling mark.