The store will not work correctly in the case when cookies are disabled.
By Charles Dickens
London   Chapman and Hall
7.5" by 5" iv, 380pp; xiv, 303pp; [6pp], 266pp
A smartly rebound collection of Charles Dickens' novels, with 'Sketches of Boz' and 'Christmas Book's being the first cheap editions, all volumes illustrated with a frontispiece.
By Charles Dickens 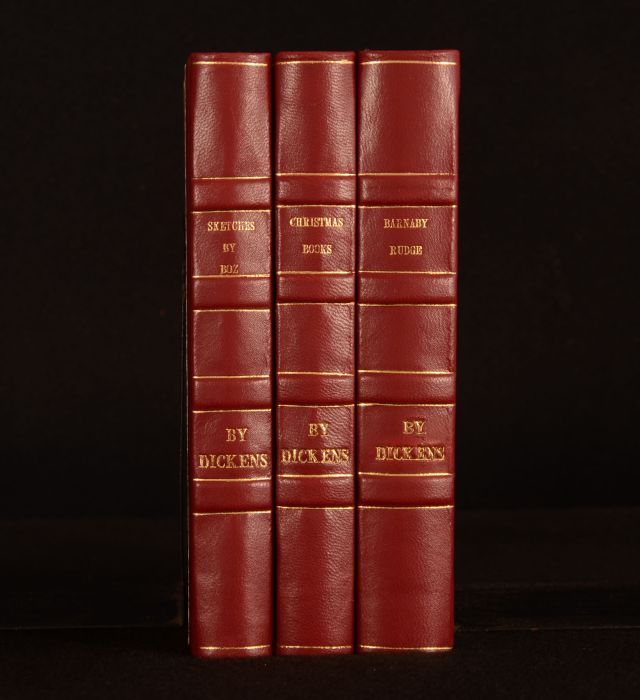 'Sketches of Boz' is the first cheap edition, published in 1850, and 'Christmas Books' is the first edition of the five collected stories published in one volume, published in 1852. 'Barnaby Rudge' with a frontispiece and four plates by Hablot Knight Browne. ‘Barnaby Rudge’ is a historical novel, set mostly during the Gordon Riots of 1780, and follows the life of Barnaby Rudge, a simple man with a loving mother, in amongst the chaos of the anti-Catholic protests. Browne is often known by his pen name 'Phiz'. He illustrated many of Dickens' books, and became so associated with Dickens, that some of his illustrations were issued as stamps to celebrate the authors two-hundredth birthday in 2012. 'Sketches by Boz' with a frontispiece by George Cruikshank. ‘Sketches by Boz’ is a collection of short stories and scenes concerning London life, which were originally published in various newspapers and periodicals. They offer an amusing look at 19th century life in London. 'Christmas Books' with a frontispiece by John Leech. This volume includes the stories 'A Christmas Carol', 'The Chimes', 'The Cricket on the Hearth', 'The Battle of Life', and 'The Haunted Man'. Illustrated by the caricaturist John Leech, who is best known for his prolific work for Punch. His scathing portrayal of current events led to a great popularity of his work. Leech also illustrated Beckett's 'Comic History of Rome', as well as 'Hood's Comic Annual' and 'Wassail Bowl'. Charles Dickens is one of the most famous novelists who has ever lived, his books being read worldwide by old and young. His novels often showed a grittier side to Victorian London, being associated with the dark and grimy city in novels like 'Oliver Twist', with the term 'Dickensian' being used to describe anything like that. Collated, complete.