The store will not work correctly in the case when cookies are disabled.
By Charles Dickens
London   Chapman and Hall
9" by 6" xvi, [1], 2-624pp
A finely bound, first edition, first issue of Charles Dickens' novel 'The Life and Adventures of Nicholas Nickleby'. Bound from the parts, with the front wrappers of all twenty parts bound to the rear.
By Charles Dickens

1839 The Life and Adventures of Nicholas Nickleby 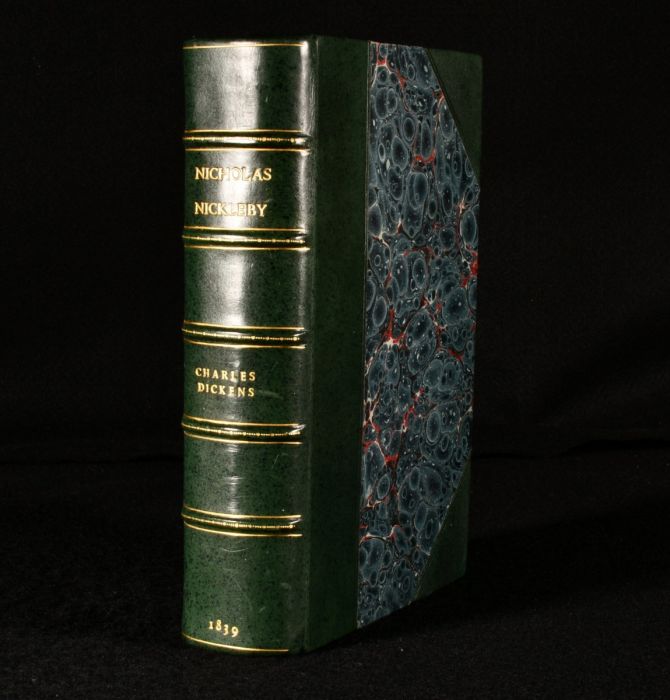 Collated, complete, with a frontispiece and thirty-nine plates.

With the front wraps of all twenty of the original parts bound to the rear. They are in a very bright condition. Rebound, in a recent half calf binding, which is in a fantastic condition.

The first edition, early issue, in accordance with all the issue points. Eckel pp.64-66; Gimbel A40. p.160 with 'latter' uncorrected  has a neat manuscript correction.

'Nicholas Nickleby' is a novel about the eponymous character, a young man who has to look after and support his mother and sister after the death of his father. They move up to London, where they meet their only relative, the antagonist Ralph Nickleby, and Nicholas finds a job with the horrific Wackford Squeers, who runs the Dotheboys Hall in Yorkshire. Like much of Dickens' work, the novel has a tone of ironic social satire. It was originally published in monthly parts. The cruelty of the character Wackford Squeers was inspired by a real schoolmaster names William Shaw who worked in Yorkshire. 'Nicholas Nickleby' was Dickens' third published novel (after 'The Pickwick Papers' and 'Oliver Twist') and cemented his reputation as one of the greatest writers of the Victorian age.

Charles Dickens is possibly the most well-known Victorian author, with his fifteen novels still being widely read and performed, as well as being studied in school and enjoyed by people of all ages. Illustrated by Hablot Knight Browne, most often known by his pen-name 'Phiz'. As Phiz, he illustrated many of Dickens' novels, including 'David Copperfield', 'Dombey and Son', and 'Bleak House', as well as illustrating for 'Punch' throughout his life.

Rebound, in a recent half calf binding. Externally, excellent with minor shelfwear. Internally, firmly bound. Pages are bright. Occasional scattered spots, mostly to plates, as is common with this work.