1824 The Works of Henry Fielding 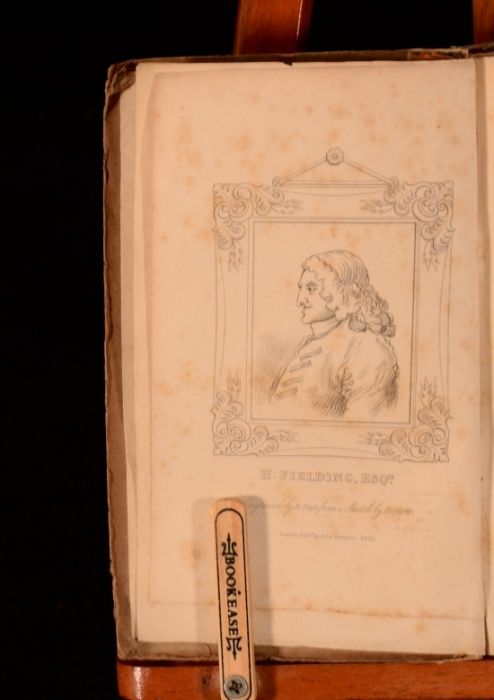 A novelist and dramatist known elsewhere for his contribution to the history of law-enforcement, having founded London's first police force, The Bow Street Runners, Fielding is noted for his rich humour and satirical prowess, with which we would criticise contemporary governments and various establishment figures. A licensing act essentially banning the usage of satire on the Eighteenth Century stage would force him out of the industry, leading to his subsequent work as a barrister and novelist. Here, we see both Fielding's plays and novels, as well as a biography of Fielding by the anonymous editor of this collection. Also included is a frontispiece plate of the author engraved from a sketch from Hogarth. The volumes contain the following: Volume One: The Life of Henry Fielding, Esq, Love In Several Masques, The Temple Beau, The Author's Farce. The Lottery and The Coffee-House Politician. Volume Two: The Tragedy of Tragedies; or, The Life and Death of Tom Thumb The Great, The Letter-Writers, The Grub-Street Opera, The Modern Husband, The Mock Doctor, The Covent Garden Tragedy and The Debauchees. Volume Three: The Miser, The Intriguing Chambermaid, Don Quixote in England, An Old Man Taught Wisdom, The Universal Gallant and Pasquin. Volume Four: The Historical Register, Eurydice, Eurydice Hissed, Tumble-Down Dick, Phaeton In The Suds, Miss Lucy In Town, The Wedding Day and The History Of The Late Mr. Jonathan Wild. Volume Five: A Journey from This World to The Next and Joseph Andrews. Volume Six: Joseph Andrews (continued) and The History of a Foundling. Volume Seven: The History of a Foundling (continued) Volume Eight: The History of a Foundling (continued) Volume Nine: The History of a Foundling (continued) and Miscellanies. Volume Ten: Amelia Volume Eleven: Amelia (continued) Volume Twelve: Miscellanies

In the original publisher's paper-covered boards. Externally, there is significant wear to the boards, joints, extremities and backstrip, with loss to backstrip, cracking to spine and joints, tenderness to hinges, as well as rubbing and marking to boards. Internally, the pages are generally firmly bound, although there are quite significant instances of strain throughout the set, and the pages are spotted throughout, with some irregular cutting.