The store will not work correctly in the case when cookies are disabled.
By Major David Price
London   J Booth; Longman et al.
11.5" x 9.5" xvi, 606, [3], 485-998
First editions of volumes one and four of the British army officer and orientalist's history of Muslim peoples.
By Major David Price

1821 Chronological Retrospect, Or Memoirs Of The Principal Events Of Mohammedan History 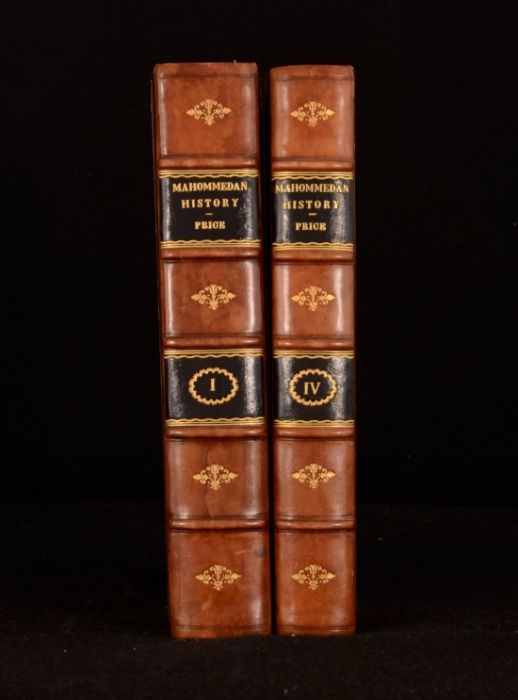 According to the Oxford Dictionary of National Biography, Major David Price, "saw action in the Third Anglo-Mysore War against Tipu Sultan, and, on retiring from the East India Company's service, settled in Wales and "devoted himself to writing long, leisurely works on Arabian, Persian, and Indian history. Of these the best-known and the most important is Chronological retrospect, or, Memoirs of the principal events of Mohammedan history from original Persian authorities." The work is organised into three volumes and four parts. The physical volumes each represent one part. The physical volume four is part two of volume three. The period covered is that from the death of Muhammad to the accession of Akbar the Great, Mughal Emperor, in 1556. Volume one is based largely on the Persian chronicles of Mirkhand and Khandamir, while volume four is based on Abu'l-Fazi, Akbar's vizier. An important work in the development of Western study of Muslim peoples and history.

In half calf. Externally excellent with very little shelfwear. Internally, the pages are untrimmed and the edges a little dirty as a result. The pages are all a little cockled. Some pages are uncut at the top edge. Generally bright and clean throughout, with the occasional light mark here and there. Firmly bound.